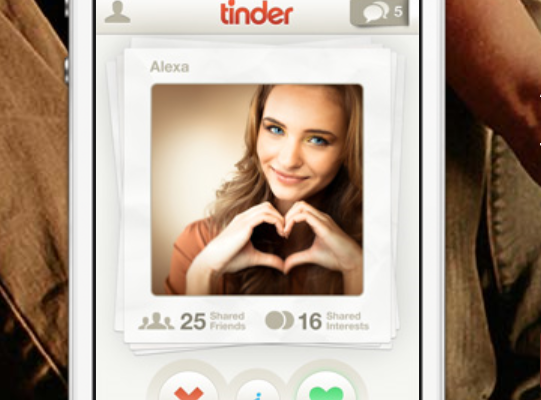 Tinder, the latest technology-driven flirting crutch, has transferred the collegiate hook-up scene to cyberspace, where today’s 20-somethings – raised in a culture with “participation trophies” and “there’s no wrong answers” – can find possibilities for meaningless sex without fear of rejection.

“Tinder eliminates the hurt of getting turned down,” the company’s spokeswoman, Alexa Manteen, is oft-quoted as saying.

These Tinder-fueled one-night stands, which epitomize romance upon college campuses, have become incredibly popular. Launched in October at USC, the smart-phone application has since been “downloaded by millions of millennials” and “helped make more than 20 million matches,” the Los Angeles Times reported in March.

Here’s the way it works: Tinder is a smart-phone application, and users download it and form a Tinder account with pictures taken from their Facebook profile. Next they elect a radius of 10 to 100 miles from which potential “matches” can be pulled.

Then the game begins.

Pictures of other Tinder users located within the radius appear on the phone screen. The application displays the potential match’s first name, age, and the number of shared Facebook interests in addition to photos. The Tinder player proceeds to tap a green heart button to “hot” the individual, or hits a red X to “not.” A new match appears, and the cycle repeats. When two Tinder users “hot” each other, the application notifies each of them that they are a match, and allows them to message each other. If the “hotted” individual doesn’t reciprocate the sentiment, the secret is safe with Tinder.

That Tinder is currently going viral on college campuses nationwide speaks to the appeal of such a trivial application. Tinder removes the risk of being painfully rejected, providing users only with ego-boosting affirmations of physical appearance. And because it’s based upon nothing more than “hotting” a photo, Tinder doesn’t suggest any form of commitment — catering to the commitment-phobia that runs rampant in college “hookup” cultures. It’s unsurprising that such an application is striking such a chord.

Nearly 80 percent of Tinder users are between the ages of 18 and 25, one of the company’s owners told The Los Angeles Times.

Already, a Huffington Post tech writer had dubbed the phrase “Tinderitis – or the sensation of having a sore thumb from swiping to approve or reject the faces of people offered up as potential date material.”

“Tinder has lured people in by unabashedly offering a place to do all the things we love doing online, but won’t admit to: act shallow, make snap-judgments based on looks, obsess over what people think of us and boost our egos. It’s turned passing judgment into a pastime, and people are thrilled to take part,” writes tech editor Biana Bosker on Huffington Post.

The irony, however, is that in the context of college campuses, Tinder’s ability to remove the potential for rejection suffers diminished capacities. College students are frequently matched with campus acquaintances or other students from their own friend groups. When a friend or acquaintance pops up on your Tinder application, you can assume that you have likewise popped up on theirs. If you’ve hotted them and Tinder has not notified you of a match—well, you’re out of luck.

There’s also the dilemma involved when individuals in platonic relationships appear on each other’s Tinder screen. Do they “hot” or “not” their friend? If you “not” the individual, but he or she “hotted” you, they’re bound to realize that you’ve rejected them when the “It’s a match!” notification fails to appear.

Tinder also has a tendency to produce uncomfortable moments even between strangers. Suppose two people reciprocate the “hot,” but fail to consecrate their holy “matchimony” by messaging. What happens when they cross paths in the dining hall? Make eye contact in the library? Awkward!

The point is—Tinder isn’t quite as alluring as it may first seem, a fact not lost on a fair amount of college kids.

“I’m pretty sure everyone who uses Tinder views it as creepy, and I have yet to figure out why so many girls use it,” Washington University in St. Louis freshman Josh Dubin told his campus newspaper Student Life. “I think it’s just something fun to do when I’m bored or in class. … There have been occasional matches that led to conversations which have lasted as long as a month, but I’m only still talking to them in the hopes that I get a nude pic.”

Ohio State University sophomore Collin Stewart told The Lantern campus newspaper that some of his friends have promoted Tinder, but personally thinks the app is “a little bit creepy and weird.”

“What if you’re walking through the Oval or you’re at a party and you see someone who is your Tinder match?” she said.

Nevertheless, considering the application’s astronomical growth in less than a year, its propensity to stroke egos, and its support of the prolific college hook-up culture, the tech is probably – unfortunately – here to stay.