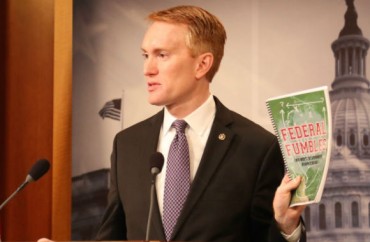 ‘It was this type of overreach that the American people repudiated’

Congressional leaders who have long criticized the Obama administration for the Department of Education’s perceived overreach are promising big changes under a Trump administration.

That includes pressing for a leader of the Office for Civil Rights who will “stop the practice of using the office as an unchecked regulatory entity,” Republican Sen. James Lankford, who chairs the regulatory affairs subcommittee, told The College Fix in an email.

Rep. Virginia Foxx, the new chair of the House Education Committee, has said she has even grander designs: “to see the [entire] department scaled back.”

Advocates for the department’s current methods, including a sweeping interpretation of Title IX that micromanages how colleges handle sexual-misconduct complaints, have already tried to thwart anticipated changes.

They are speaking out against President-elect Donald Trump’s nominee for secretary, Betsy DeVos, for her donations to the Foundation for Individual Rights in Education, a vocal critic of the department’s sexual-misconduct “guidance.” Republicans will ‘put a stop to this abuse’

Under the Obama administration, the department used alternate means to issue de facto regulations to colleges without going through the required rulemaking process, according to critics.

“Some of the most egregious examples of executive overreach and intimidation” took place at the department, “and I believe it was this type of overreach that the American people repudiated in this election,” Lankford told The Fix.

Administration officials “have abused ‘Dear Colleague’ letters and ‘guidance documents’ to mandate policies for schools without adhering to legally-required regulatory processes,” he said.

Lankford’s top priority for Trump’s incoming department is the appointment of an Office for Civil Rights director who understands and abides by proper regulatory processes.

“The new leader of the Department of Education, and especially the Office [for] Civil Rights, must restore the action of the office to their original construct and stop the practice of using the office as an unchecked regulatory entity,” he said: Unified Republican governance should “put a stop to this abuse.”

Incoming Chairman Foxx, a former college president with a Ph.D. in higher education, has been vocal in speaking against the federal government’s intrusion into states’ decisions on education policy.

After Trump’s election, she told Inside Higher Ed that the new Congress will “have a lot of emphasis on oversight,” but said she wanted “some really, really competent people” who will investigate “what’s going on” in the department from the inside.

Asked about the rumors that the Trump administration will eliminate or scale back the department’s reach, Foxx said: “I definitely see the opportunity to see the department scaled back,” in particular by devolving its functions to the state and local level.

According to The Chronicle of Higher Education, Foxx wants to torpedo an Obama rule (currently blocked by a federal judge) that “would make more salaried employees on college campuses and elsewhere eligible for overtime pay.”

She also wants to eliminate regulations on for-profit colleges and teacher-prep programs. Those regulations also bailed out student victims of fraud with taxpayer dollars.

Foxx once told a radio program she has “very little tolerance” for students taking out large loan amounts and their consequent dependence on the government. She is an advocate for early-college programs to save both students and governments money, as well as encouraging students to explore vocational training.

Foxx’s office responded to an initial Fix inquiry but did not provide a staffer to answer questions.

One of the open questions about a Trump presidency is how colleges might modify their speech codes in response.

House Judiciary Committee Chairman Bob Goodlatte asked colleges in August 2015, and again in February 2016, to tell him how they are promoting “free and open expression” and bringing campus policies in line with the First Amendment.

He targeted 160 colleges slapped with a “red light” rating by the Foundation for Individual Rights in Education, meaning they have “at least one policy that both clearly and substantially restricts freedom of speech.”

In his second letter, Goodlatte targeted 33 colleges that had not responded a full six months after his deadline.

Goodlatte’s office did not return multiple emails and voicemails sent by The Fix seeking an update on his effort. No excuse for violating due process without ‘guidance’

DeVos, Trump’s nominee for secretary of education, is best known for her philanthropy related to education reform in Michigan and charter-school expansion. She has also supported reform in Florida and Michigan, as well as the school-voucher movement.

But in the higher education realm, observers are focused on how she might change federal rules on disciplinary proceedings for sexual-misconduct allegations.

“Many believe” a DeVos-led department will get rid of the Office for Civil Rights’ 2011 guidance document on the subject, Inside Higher Ed reported.

That document, portrayed as nonbinding, told colleges to use a low evidence standard and abandon common protections given to the accused in civil-court settings, such as the right to cross-examination.

If it’s junked, colleges won’t be able to cite the guidance if they are sued by students who allege they were deprived of due process in campus proceedings.

Higher education legal consultant Gary Pavela told Inside Higher Ed that it was wrong for OCR to have “transformed that floor into a ceiling,” referring to the “preponderance” evidence standard mandated by the guidance.

Choosing an evidence standard “should be based [on] our own campus-based analysis and experience,” not dicates from Washington, he said. But as long as “other reasonable due process standards are applied,” colleges can probably continue using preponderance without “legal risk.”

Colleges won’t miss the 2011 guidance, if previous comments by the American Council on Education are any indication.

The group, which represents 1,800 college presidents at the federal level, last year called OCR “a Court of Star Chamber, with arbitrary rulings, no rights for those under investigation and a secret process” governing schools who fall under Title IX investigation.