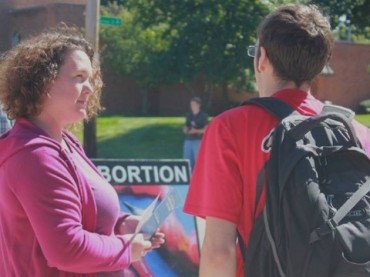 A trend seen by prolife activists that frequently engage college students on campuses nationwide is the growing acceptance of post-birth abortion, or killing the infant after he or she is born, campus prolife outreach leaders tell The College Fix.

Anecdotal evidence by leaders of prolife groups such as Created Equal and Survivors of the Abortion Holocaust said in interviews that not only do they see more college students willing to say they support post-birth abortion, but some students even suggest children up to 4 or 5-years-old can also be killed, because they are not yet “self aware.”

“We encounter people who think it is morally acceptable to kill babies after birth on a regular basis at almost every campus we visit,” said Mark Harrington, director of Created Equal. “While this viewpoint is still seen as shocking by most people, it is becoming increasingly popular.”

Campuses where the high school, college students, local activists and staff members of Created Equal have encountered this opinion include Purdue, University of Minnesota, and University of Central Florida. And at Ohio State earlier this year, the group captured a debate on video between one of its members and an older woman on campus who defended infanticide.

“This is the whole problem with devaluing human life at any stage—it will naturally grow to include other groups of humans; in this case, born humans as well as preborn humans,” Harrington said. “[I] talked with one young man at the University of Minnesota who thought it was alright to kill children if they were under the age of 5 years old, as he did not consider them persons until that age.”

Kristina Garza, spokeswoman for Survivors of the Abortion Holocaust, a prolife organization that often sets up anti-abortion displays on campuses along the West Coast, said her group also frequently encounters college students who accept infanticide.

“For those who are firmly for abortion, because they understand it kills a human being, it’s very easy for them to accept killing a human being after birth,” Garza said. “There is this notion that is common on campus, that it’s OK to kill babies because somehow we don’t become human until we are self aware.”

“A common number that is going around is 4 years old,” she adds.

As for the trend, Garza said there’s an explanation for it. For one, the arguments put forth by Peter Singer and other philosophers who support infanticide are given as reading assignments to college students.

Singer wrote in 1979 that “human babies are not born self-aware, or capable of grasping that they exist over time. They are not persons … [therefore] the life of a newborn is of less value than the life of a pig, a dog, or a chimpanzee.”

“He has been saying things like this since the 70s, but I think it has been more recently that this type of ideology is being promoted on college campuses,” Garza said. “When he said this stuff, there was a very select few who accepted it. But nowadays, we have become so desensitized, and college students lacking in a moral fiber easily accept this kind of strange ideology.”

But prolife advocacy and engagement on campuses has helped turn students away from pro-choice stances, she adds.

“The trends I am seeing is it’s not so much students are better grounded in morals, it’s that we as a prolife movement have done our job in presenting a better argument, and we are pushing people out of the middle,” she said. “We are seeing more students who see the logic and choose to be anti-abortion.”

Yet staunch opposition to the prolife philosphy remains.

Asked about the incident at Ohio State, at which a woman responded to a prolife display by defending infanticide, a pro-abortion activism group at the campus stated its views were similar to those of the woman in the clip.

“As for post-birth abortion, I would imagine that my colleagues would think the ‘post-birth’ part was largely irrelevant, as we believe very strongly in abortion on demand, without apology, and it’s plain and simple that we should look to the woman’s morals and not shove our opinions where they, frankly, don’t belong,” Devin Deitsch, leader of VOX: Voices for Planned Parenthood at Ohio State University, said in an email to The College Fix.

“Speaking as the primary leader of VOX, I assure you we are very pro-choice,” Deitsch also noted. “… We are not here to advocate for women to get abortions, we advocate for her ability to make that choice without fear, heckling, or barriers. Essentially, we ask for a woman (and her body) to be respected. Nothing more, nothing less.”