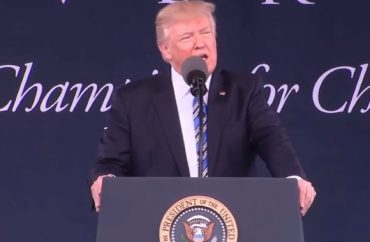 Trump gives his first of two commencement speeches at Liberty University; he will give just one more graduation address this spring

Don’t ever give up, President Donald Trump told “the next generation of American leaders” at Liberty University on Saturday.

In his first commencement speech as commander-in-chief, Trump imparted a wide range of advice to the outgoing students at the evangelical Christian university in Lynchburg, Virginia.

“If I give you one message to hold in your hearts today, it’s this. Never, ever give up,” Trump said.

Trump’s appearance at Liberty was the first of two commencement addresses he’ll give this spring. His second and final speech will come on Wednesday at the United States Coast Guard Academy. In contrast, President Barack Obama gave three commencement addresses in his first year in office. They included speeches at some of the most well-known institutions in the nation.

As for Trump, his remarks stretched over 3,500 words and like most commencement speakers, he spent a large portion dispensing wisdom to the graduates.

Those who have achieved great things always faced critics, Trump said, telling the students to avoid being one of the doubters.

Often dubbed an “outsider” himself, the president told students that they themselves should bask in that label “because it’s the outsiders who change the world and who make a real and lasting difference.”

At times, Trump’s remarks touched on patriotic themes, such as when he mentioned that “in America we don’t worship government — we worship God.” He also pushed the graduates to work together to ensure a bright future for the United States.

“We must always remember that we share one home and one glorious destiny whether we are brown, black or white. We all bleed the same red blood of patriots. We all salute the same great American flag, and we are all made by the same almighty God,” he said.

Trump’s commencement speaking schedule is slightly less busy than that of first-year President Obama in 2009. Like Trump, Obama also spoke at a service academy but had appearances at a prestigious private institution and one of America’s largest public universities as well. His first-year stops included the University of Notre Dame, Arizona State University and the United States Naval Academy.

Trump’s speech at Liberty is his only commencement appearance at a civilian institution this year. Liberty’s president, Jerry Falwell Jr., was a stalwart supporter of Trump during the 2016 election. The College Fix previously reported that it appeared Trump was being shunned by universities as commencement season neared.

Notre Dame has a tradition of inviting newly inaugurated presidents to address its graduates, but the prestigious Catholic university sidestepped its presidential tradition this spring. Instead, Vice President Mike Pence was invited to address the graduates.

Since Bill Clinton’s presidency, the sitting president has given an average of three graduation addresses annually, according to FiveThirtyEight.