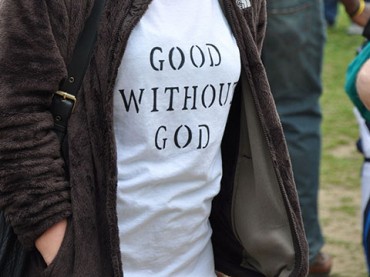 In the midst of a hiring spell this summer for its University Chaplaincy, Tufts University added its first non-religious chaplain: a “humanist in residence.”

That’s not what makes the position at Tufts unique, though. It’s the first university-funded humanist chaplain in the country.

The appointment of Walker Bristol, a Harvard Divinity School master’s student who only graduated from Tufts in May, ends a five-year campaign by the Tufts Freethought Society to add a humanist chaplain. Bristol himself was a leader in the society.

The new hires all have connections to Harvard Divinity School and similar interfaith backgrounds, as noted in Tufts’ announcement last week.

But in contrast to the other hires, Bristol’s position is only a two-year pilot “designed to assess the desires for and benefits of designated chaplaincy support” for non-religious groups, Tufts said.

The role of the humanist chaplain is to “serve any students who are atheist or agnostic or humanist, but also who are not traditionally religious, or are searching, or are spiritual but not religious, really anyone who does not fall into the normal traditional boundary lines we draw when we think of religion,” Bristol said in an interview with The College Fix.

Humanism differs from most established religions because there is no unifying dogma or a set of regulations, according to Bristol, who studied religion and philosophy at Tufts.

It comprises “a wide stance for atheists or people who don’t identify with organized religion to affirm that they have values and moral commitments towards serving humanity with what we have at our disposal here on earth … rather than elsewhere and kind of living in the present in that sense,” Bristol said of humanism.

Bristol said he’s available to “anyone who is looking for someone to talk to very generally about their spiritual and ethical commitments and their moral problems they are having in their day to day life.”

The university was previously hesitant to add a non-religious position to the chaplaincy, Bristol said.

“Now that the position has been established and that I’m meeting with students … people are really starting to see how this is really helpful and useful to the rest of the community,” Bristol said.

Rev. Greg McGonigle, the top chaplain at Tufts and a Unitarian Universalist, said in an interview with Religion News Service that the humanist “trial position … may yield research useful to other universities and be a model they may choose to try.”

He defended the university-funded position by noting that “many of history’s proudest moments of social justice and liberation … have involved people’s religions, values, and worldviews.”

McGonigle did not respond to a request for comment by The College Fix.