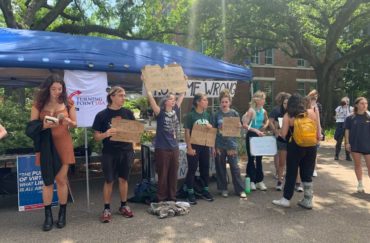 Students formed a “human wall” in front of a conservative club’s event on the problems with censorship and socialism.

Student activists on Monday shouted down members of conservative group Turning Point USA during the group’s “Prove Me Wrong” event at Tulane University.

Campus coordinator Driena Sixto along with the club were holding an event to invite students to debate them on whether “censorship always precedes socialism,” according to an article on the national organization’s website.

The “Prove Me Wrong” event concept originated with conservative comedian Steven Crowder who often goes to public places or universities and encourages people to debate him on different topics.

Students carried signs that read “CAPITALISM KILLS,” “I WANT TO LIVE IN A COUNTRY THAT HAS OUR BACK” and “ALL CAPITALISM IS CRONEY [sic] CAPITALISM.”

“Nobody wants you here,” a student can be heard yelling.

The conservative student group eventually requested assistance from campus police to break up the disruption.

“This is how the left handles views that threaten its agenda: it silences, shouts down, and intimidates. But TPUSA is not intimidated by the left,” Turning Point staffer Isabel Brown wrote.