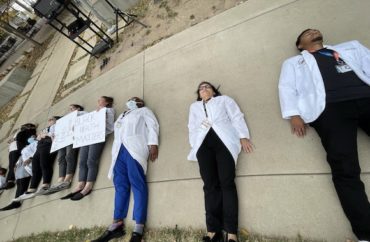 The University of Colorado chapter of White Coats for Black Lives held a “die-in” at its Anschutz campus on Tuesday for precisely eight minutes and 46 seconds — the amount of time Derek Chauvin held his knee on George Floyd’s neck in the infamous incident from last May.

According to a news release from the CU Anschutz Medical Campus, the die-in’s symbolism also represented the “centuries of systemic and structural racism and racial injustice that Black Americans have endured.”

White Coats for Black Lives’ (or WC4BL) stated mission is “to dismantle racism and accompanying systems of oppression in health, while simultaneously cultivating means for collective liberation that center the needs, priorities, and self-determination of Black people and other people of color, particularly those most marginalized in our communities.”

Professor Shanta Zimmer, MD, dean for diversity and inclusion at the CU School of Medicine, said black and brown med students need the allyship of their white peers. “There are no changes made in isolation,” she said, adding if the deaths of Floyd and Eric Garner weren’t “a call to the medical profession, I don’t know what is.” 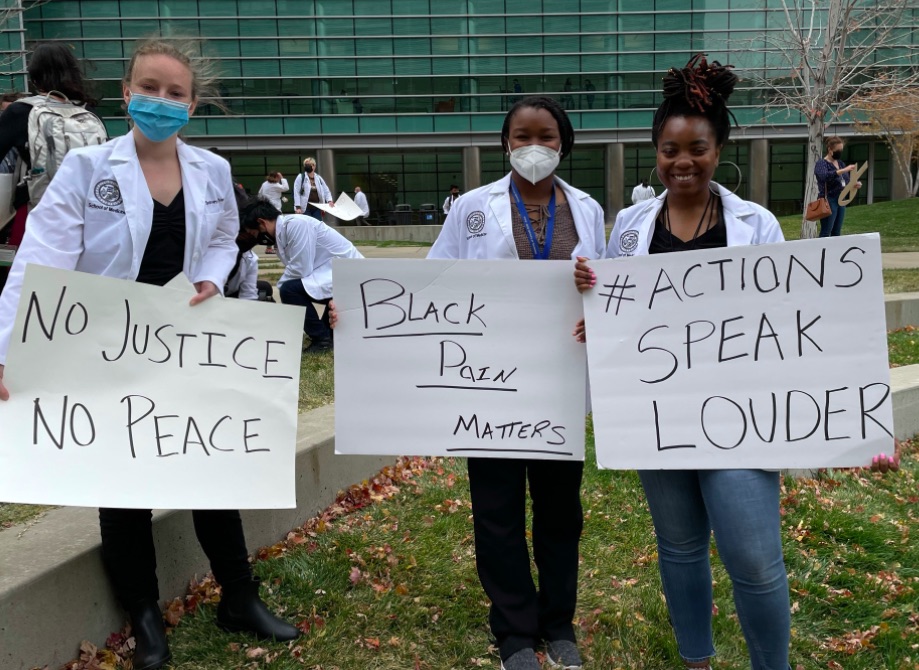 “Sometimes it seems like the burden is on us to feel all the weight of racism,” [second-year medical student Bruck] Gezahegn explained. “It’s important to see that we are not alone. Small things can be watershed, how as a Black kid, wearing a hoodie can be seen as a weapon. Those things are hard to overlook.”

[Professor James] Carter emphasized that health care and medicine are a nexus to which many paths of structural racism and racial injustice join ­– from historic disparities in access and quality of care for people of color to representation in medical schools and on medical faculties that is disproportionate to the general U.S. population.

“When we decided to go into medicine, we decided to care for patients and we decided to save lives,” [WC4BL Co-President  Helio Neves] da Silva said. “But as a profession, we’ve acted like Black pain doesn’t matter.”

He then asked the several dozen in attendance to join him in saying, “You cannot silence us. Silence is complacence. Tolerance is the seed that sprouts injustice. We will not tolerate racism. Black lives matter!”

In June of last year, the group demanded medical schools terminate their relationships with local law enforcement (including ICE), redirect funds for campus police to minority students, and come up with a plan to create an “overrepresenation [sic] of Black, Latinx, and Native American students” in medical school classes.