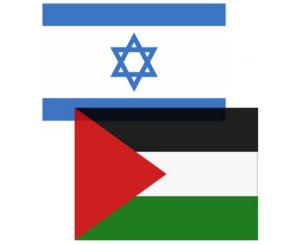 It appears even static, peaceful exhibits offering information about Israel (and featuring free grub) are too much for pro-Palestinian demonstrators at the University of California-Irvine.

On Thursday, the Anteaters for Israel, or AFI, held its annual “I-Fest.” Everything was running smoothly during the morning hours, but around twelve o’clock noon the trouble started.

Gary Fouse at his FouseSquawk reports:

Things were going along very nicely until 12 noon when pro-Palestinian protesters came marching out of the Cross Cultural Center (more about that later) located directly behind the I-Fest tables. They proceeded to march to a spot a few yards away from the AFI tables where they spread out across Ring Road, forcing other students to have to walk around their lines. They then began chanting their usual stupid slogans about Palestine. They continued for over two hours drowning out the AFI music and distracting all the attention away from the I-Fest proceedings. Several Jewish community members began waving their American and Israeli flags. (The pro-Palestinian crowd only had Palestinian flags.) At one point, some Jewish folks began doing their traditional dances in response to the protesters.

The campus police were present as was the dean of students. Later the vice chancellor of student affairs showed up. When they were finished with their protest, which outlasted the remainder of the I-Fest, the protesters straggled back to the Cross Cultural Center (their “safe space”). They had disrupted and marred what had been for the first hour a pleasant, quiet and civilized event.

Fouse recorded some of the happenings:

Fouse also has criticism for the head of the local Hillel and the Jewish Federation of Orange County.

The former, he writes, was “trying to direct members of the community holding Israeli and US flags to move back as they were facing the protesters,” while the latter “berat[ed] the head of AFI” and “got in her face and blamed her for everything going wrong.”

In addition, Fouse notes that the Cross Cultural Center has been used “for years” by the Muslim Student Union as a “staging area” to disrupt campus Jewish events.