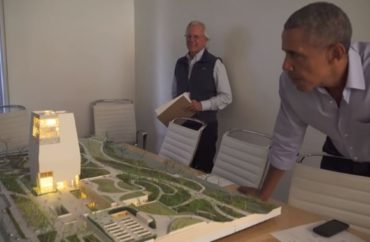 Faculty at the University of Chicago have joined a growing chorus of Chicagoans voicing alarm and anger over the planned Obama Presidential Center, set to be built in a sprawling historic park in the south side of the city.

Residents and environmentalists alike have signaled frustration and opposition to the plans to build the large, five-building mecca in the heart of the beloved, 140-year-old park flanking Lake Michigan — and many faculty at the private university located blocks away from the site agree.

A public letter published in mid-January signed by nearly 200 professors argued that the Obama Presidential Center plans disrespect and monopolize precious parkland, will be a boondoggle for taxpayers to the tune of hundreds of millions of dollars, will cause nightmarish traffic jams, and will hurt the environment, among other concerns.

“We are concerned that these are not the best ways to use public funds to invest in the future of Chicago,” the letter states. “… We are concerned that rather than becoming a bold vision for urban living in the future it will soon become an object-lesson in the mistakes of the past. We urge the Obama Foundation to explore alternative sites on the South Side that could be developed with more economic benefits, better public transportation, and less cost to taxpayers.”

Soon after the professors’ letter went public, developers announced they would construct the parking facility underground to address some complaints. Some scholars remain skeptical more will be done to ease concerns.

“They promise enormous community benefits, but refuse to put their promises in writing. Their plans require major modifications to the entire structure of commuter traffic, so-called ‘improvements’ to the road system that will cost taxpayers hundreds of millions of dollars for a transportation system that will be no better, and probably worse,” English Professor Tom Mitchell told The College Fix.

“I’m not overly hopeful that the Foundation will make further concessions. … But I do think that neighborhood protests have been heard by the Foundation on two issues: the garage, which they’ve now agreed to move off the Midway and to put underground within the footprint of the Center itself, and a guarantee of minority hiring,” Elizabeth Helsinger, an English professor, told The College Fix.

Distinguished service professor Jonathan Lear told the Chicago Maroon campus newspaper he too was pleased by some planned changes, but work still needs to be done.

“The underground parking garage does address one of our concerns about the misuse of a historic public park,” Lear said, “but the other serious issues raised in the letter—the relative lack of opportunities for economic development, the huge burden to taxpayers, and the unprecedented size of historic public parkland to be given to a private entity—remain to be addressed.”

The open letter argues that the Obama Presidential Center will likely not give the outside community any economic benefits, rather than jobs at the center itself.

“There is no available adjacent land in which to start a new business, set up a new café or restaurant, bring another cultural center to the neighborhood,” the letter states.

Another point is that Jackson Park, where the center is to be built, is on the National Register of Historic Places, and by building a center that takes up 21 acres of historic land, it is contrary to preserving public parks.

Professors are not alone in their concerns. Community activists have said they are upset that the plans morphed from a public presidential library run by the National Archives and Records Administration to some sort of private presidential center.

The Obama center says the majority of the facility will be free and open to the public. It is expected to include a forum, museum, library, plaza and athletic center.

Recent letters to the editor in the Chicago Tribune seem to fall in line with majority sentiments, with headlines such as: “The Obama center sets a dangerous precedent”; “Who will benefit from the Obama center?”; “The Obama Center is sure to disappoint”; “Obama center plans suffer from a lack of transparency”; and The Obama center is an ugly waste of taxpayer resources.”

“Does anyone else think the artist’s rendering of the proposed Obama Presidential Center campus is ugly? A 225-foot tower and associated buildings are garish monstrosities that ruin the aesthetics of the surrounding parkland stolen from the taxpaying public,” one letter stated.

“I am appalled that the Obama Presidential Center is taking valuable and irreplaceable park land that belongs to all the people of Chicago for an empty monumental edifice,” chimed in another.