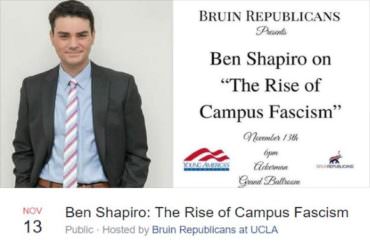 Bowing to criticism from the Bruin Republicans and a legal threat from the Alliance Defending Freedom, UCLA has withdrawn its demand that the student organization pay unspecified security fees for its Nov. 13 event with conservative pundit and alum Ben Shapiro.

The dispute was an unwelcome distraction for University of California System right as it announced plans to open the National Center for Free Speech and Civic Engagement at its internship center in Washington, D.C.

UCLA had warned the BRs that if students, faculty and staff didn’t make up at least 70 percent of the 600-person audience, the club would have to pay security fees. The BRs claim the 70-percent clause has been used four times in eight years – twice against its events.

A university spokesperson told KPCC that it will pay the “basic security costs” for this event and “going forward” for other events as it reviews the current policy. He cited its “commitment to free speech, and to avoid any appearance to the contrary.”

The BRs said on Facebook that they would not be satisfied until UCLA changes its “inherently discriminatory policy to comply with the Constitution”:

Although we appreciate that the University agreed not to apply this unconstitutional policy to our organization in this instance, we are still requesting that the University modify its policy so that it cannot be used to discriminate against us or any club in the future.

UCLA Law Prof. Eugene Volokh, a First Amendment expert, wrote in The Washington Post that he had spoken “at some length” with the BRs’ lawyer before the school dropped its fee demands.

The lawyer had said the club would have to pay an unspecified fee to “the contractor who takes care of the reservations and checking for the 70-30 policy” as well as a separate (and also as-yet unknown) “crowd control” fee even if it met the 70-30 threshold for UCLA to pay the “Safety Services” costs, on top of the rental fee.

The only fee that university definitely pays is the “cost of additional security required to respond” to protests of the event.

Volokh said the club’s threat letter to the university was “quite well argued,” and he scolded UCLA for creating an easily avoidable situation:

Nonetheless, if the university does set up such a policy, creating what is called a “limited public forum,” it has to define and enforce the rules in a viewpoint-neutral way, and define the rules objectively (since vague rules can so easily be enforced in a viewpoint-based way).

The 70-30 policy looks viewpoint-neutral “on its face” but leaves “a good deal of room for discretion,” Volokh said.

UCLA has yet to respond to several questions from Volokh, he said, including whether the policy has been “uniformly applied to all events of a similar size” as the Shapiro event and how the mandatory ticketing policy can be abused:

Opponents of the event can reserve many student tickets and not show up, thus essentially blocking willing audience members from showing up. Students are discouraged from attending because they’re told all the tickets have been distributed already, and general community members are barred from showing up because only a few students/faculty/staff are there, and the 70-30 rule kicks in.

While he praised UCLA for paying for security in response to protests against speakers like Shapiro, Volokh says the school has work to do:

If the policy is haphazardly applied, for instance only when administrators think about it because the speaker has drawn protests in the past, then it is in practice too discretionary, too pregnant with the possibility of viewpoint discrimination and thus unconstitutional.

Read the KPCC story, the BRs’ response and Volokh’s analysis.