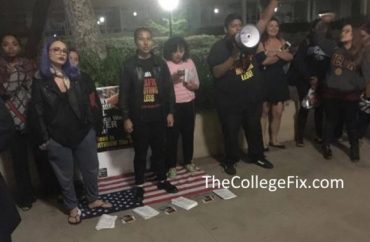 At a recent event hosted by the UCLA Bruin Republicans, members of the school’s communist “Revolution Club” retaliated against keynote speaker Sabine Durden, an anti-illegal immigration activist, by defiling an American flag.

At times, protesters also chanted over and shouted at panelists as the event took place Thursday, video obtained by The College Fix shows.

Known for testifying on behalf of her son — a former 9/11 dispatcher who was killed by an illegal immigrant — Durden actively campaigns for Donald Trump, advocating for national security and strong borders.

But Durden drew the ire of students who crashed the event. They called for open borders and condemned her for using the term “illegal aliens.” Many were members of the “Revolution Club UCLA.”

At one point Durden was almost at the brink of tears.

“I don’t mind anything you have to say, whether if you agree with me or not, but it’s incredibly hard to be here and talk about my son,” Durden said. “I expect you guys to be somewhat respectful.”

But the event, titled “Sabine Durden: An Illegal Immigrant Killed My Child,” continued to be frequently disrupted. The student hosts and audience members frequently called on police officers in the room to keep the peace, but the officers did nothing.

Without fear of the police, one protester who had been humming throughout the event even erupted into full-on chanting and drumming.

Even with their disruptions, Durden powered through the event.

She took questions from visibly angry audience members, such as “how do we begin to address the history of genocide and the history of colonization before we go and mark the undocumented community as a whole as being a criminal identity?”

“The undocumented community are criminals by law,” Durden replied. “You have to take care of your own first before you can take care of others. So if I take care of my American people that have a right to be here first, and we have enough American criminals. We don’t need new criminals that aren’t even supposed to be here.”

When told “do not call them illegals,” Durden also stood her ground.

Sabine: “Even if its 2% of crime committed by illegal aliens, that’s 2% too many”

Sabine: “I want everyone to come to the United States, but you have to do it legally.’

Sabine: “If our laws were enforced, this man (the killer) would never have been in the United States and my son would be alive”

Outside the event, protestors took their anger out on an American flag, stepping on it and calling for a total communist revolution.

Some of their chants included: “Is America great today when it wages a genocide against black and brown people. … It’s murdering pigs, it’s murdering police shoot them down without any consequence? Hell no. This whole system is criminal. This event is promoting a racist, fascist, xenophobic agenda. Illegal immigrants are not the real criminals. The criminals are this country and the entire system that feeds on the exploitation and people of the world.”

They also demanded a world “without order for a world free of exploitation and oppression.” When a passerby dared suggest the group leave America if they hated it that much, they responded: “No thanks, we’d rather overthrow it.”

Members of the Bruin Republicans could not be reached for comment Friday by The College Fix.

Mark Kahanding contributed to this report.