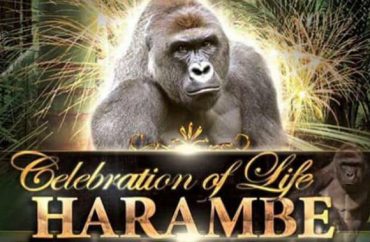 “Colleen and Ryan” are two resident assistants in Sycamore Hall at the University of Massachusetts-Amherst.

They think that campus jokes about “Harambe,” the Cincinnati Zoo gorilla that was killed to protect a child who fell in his enclosure, are actually an attack on black students and women.

You may have seen the hubbub about their letter to floor residents, reported in Reason and many other outlets, warning that Harambe jokes on their whiteboards are not only “micro-aggressions” but could be investigated as Title IX violations.

UMass-Amherst released a statement Tuesday that pulled the rug out from Colleen and Ryan.

But its careful language suggests that students should keep their Harambe jokes private if they don’t want to be sanctioned by UMass at some point in the future.

‘Has not taken any steps’

For those who aren’t aware of the internet juggernaut that is the Harambe meme, Reason‘s Robby Soave explains it well:

“Harambe died for our sins,” is one. “Harambe the Gorllia [sic] Mauled By Cecil the Lion in Animal Heaven” is another. Some people even included Harambe on a list of celebrities we lost in 2016, like Prince and David Bowie. …

Another flavor of the meme is “dicks out for Harambe,” which mostly consists of people chanting exactly that. Danny Trejo is somehow involved. It’s this iteration that seems to have deeply offended the UMas-Amherst [sic] RAs: one gathers that some students had written “dicks out for Harambe” on each other’s whiteboards.

Indeed, Colleen and Ryan warn that any whiteboard phrases that encourage the “exposition of body parts” are “sexual assault incidences” that get reported to the dean of students.

Acutely aware that it was becoming an international laughingstock, UMass released a statement to media Tuesday (still not posted on UMass’s website) that some outlets – including the Boston Globe, Chronicle of Higher Education and Vice – appear to have not read carefully.

MORE: This is what happens when everything can be ‘sexual harassment’

As an institution that values free speech and the exchange of ideas, UMass Amherst has not taken any steps to ban jokes or references about Harambe the gorilla.

The email sent by two well-intentioned undergraduate student resident assistants was a cautionary attempt to advise new students on their floor that the Harambe reference could be considered offensive to residents of the campus’s Harambee community, a residential program focused on African and African-American history and culture, and that all students should be treated with respect and civility. The resident assistants were upholding their responsibility to encourage an inclusive living environment for the students on their floor.

Nothing about this statement suggests students are free and clear to make Harambe jokes to their hearts’ content. It’s not even intellectually honest about what Ryan and Colleen wrote in the first place.

The RAs repeatedly call the “Defined Residential Community” for African-American students the “Harambe” floor. But it is not called “Harambe,” as UMass itself admits without noting the RAs’ error.

It’s called “Harambee,” and as The College Fix reported in an article on a blacks-only student retreat at California State University-Fresno last month, it means “Let’s pull together,” not “the dead Cincinnati Zoo gorilla.” The RAs don’t even know what they’re talking about when they warn residents they can’t use a word that has nothing to do with the African-American residential floor at UMass. They tell students to report rogue whiteboard scrawlings of the wrong word to their RA, meaning they consider it a form of harassment at the least.

UMass calls this basic failure of its employees to learn the distinction between two words “well-intentioned,” and says the RAs were just doing their jobs.

And in a sense, they were.

As the Foundation for Individual Rights in Education notes in a post about the hubbub before the carefully worded UMass statement was released, the RAs weren’t crazy to see some Harambe references as a violation of campus policy:

Examples of sexual harassment include, but are not limited to the following behaviors when they are unwelcome or unwanted, and are both objectively and subjectively offensive: … verbal comments of a sexual nature about an individual’s body or sexual terms used to describe an individual; display of sexually suggestive pictures, posters or cartoons; jokes, language, epithets or remarks of a sexual nature … .

The phrase “dicks out for Harambe” could be seen as a “sexually suggestive” and “unwanted” joke, so it’s not surprising that RAs would worry that this speech rises to the level of sexual harassment under this overly broad UMass policy.

“Jokes … or remarks of a sexual nature” are considered sexual harassment by UMass. Now re-read its statement.

The university has not said that it will not punish students for making certain Harambe jokes in the future. It only says it “has not” moved to “ban jokes or references” to Harambe.

Under its own policy, sexual harassment is “subjectively offensive.”

MORE: ‘Cocks not glocks’ protest is sexual harassment according to the feds

Say some guys on the porch of a fraternity house are chanting “Dicks out for Harambe!” within earshot of a group of female students on the street, or even at a party within the house. Some of them are offended, and report the chanting to UMass as sexual harassment.

Does anyone really believe that the fraternity will not be investigated for this “subjectively offensive” example of “remarks of a sexual nature”?

Reason‘s Robby Soave isn’t confident either, as he writes in an update that also notes FIRE’s analysis:

This statement didn’t actually reassure me very much. … It seems to me that “dicks out for Harambe” could easily count as harassment under this definition, even though it ought to be considered protected expression. In other words, I’m concerned that a Title IX investigator could conceivably sanction a student for making the joke, even if the university says it’s not specifically banned.

When Soave asked a UMass spokesperson if “telling Harambe jokes could get a student in formal trouble,” the spokesperson said this was “not the case.”

That’s not much reassurance to me. For one thing, PR folks are only saying what they have been authorized to say at that particular moment. They have no control over how UMass actually handles a situation like I describe above – they are in the business of spinning the university’s decisions after the fact.

Second, there’s no guarantee that your version of a “joke” is the same as the administration’s. If a person or group of people who hear Harambe dick-chanting are offended, there’s nothing funny about it to them. They are “subjectively” offended.

They report it as sexual harassment. And the school investigates.

Even if the target of the investigation is eventually cleared, we’ve seen enough bias incident response reports to know that some “education” will be imposed on the target. It’s a game of semantics whether the school considers that “punishment” or “discipline.”

And we know how even the most spurious harassment complaint can spiral out of control and have a chilling effect on academic discourse. Just ask Northwestern University Prof. Laura Kipnis.

Bottom line: Tell Harambe jokes at your own peril at UMass. And provide a trigger warning first if you bring it up in class.

If you end up punished, your only hope is suing the university (with help from FIRE or the ACLU, probably) and seeing your name on a 1st Circuit Court of Appeals decision that is sort of in your favor.

And while we’re at it, why is seemingly no one offended at the ubiquitous use of “douche” as a synonym for jerk? It’s every bit as sexual as “dicks out.”