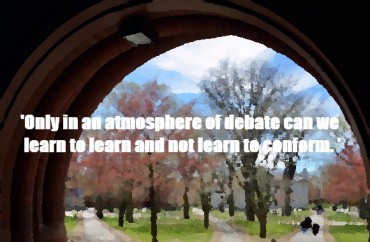 A student-run debate club at the University of Massachusetts Amherst recently had so much difficulty finding a professor who could argue the conservative side for one of its events that its members had to turn to Smith College, a private liberal arts school eight miles away, to secure a scholar.

The experience was the impetus for The University Union, a politically neutral student-run debate club at UMass Amherst, to launch a petition this month calling on administrators to offer more “intellectual diversity” on campus.

“We came to the conclusion that the petition was necessary because planning debates has been so difficult,” Owen Wiggins, a junior business management student at UMass and president of The University Union, told The College Fix in an email. “The diversity of thought among the faculty at UMass is so slim that we’ve had to ask professors from Smith College to participate in the debates we have planned.”

The petition accuses UMass Amherst professors of pressuring students into agreeing with their left-leaning beliefs. “Professors often preach their anti-American judgments to students as final ‘truths’ — such as the view that all major world problems, from poverty in Africa to ISIS, stem from American capitalism and imperialism,” the petition states. “Professors represent their views and ideologies in ways that make it seemingly impossible for any reasonable person to disagree with.”

“Dissenters from left-liberal thought on campus are considered ignorant, intolerant, and uneducated,” it adds.

Said Wiggins (pictured): “We can have a long debate about the meaning of academic freedom, but there are students on our campus who feel pressured by professors to express liberal views in their academic work. These students are unsure of where they are supposed to express their dissatisfaction. I doubt there are any students on our campus who feel pressured to adopt conservative views in their courses.”

“We are unsatisfied with the current curriculum provided at UMass Amherst,” the petition states. “The professors do not offer a wide spectrum of courses. They do not expose students to a diverse range of intellectual achievements and schools of thought.”

The petition was launched Jan. 10 and has garnered more than 150 signatures so far, Wiggins said.

In calling for intellectual diversity, the petition points out conservative “refers not to one set of party opinions but to a broad spectrum of longstanding and respectable philosophies and traditions.”

“We are not advocating one political ideology to the exclusion of others,” it adds.

“There is a real need for conservative professors on campus,” Wiggins said in an email to The College Fix. “I am fearful of an atmosphere of non-debate and non-dialogue, not just on our campus but in the United States in general.”

“… When the university fails to provide a wide spectrum of ideologies on campus, the education ceases to exist as liberal and in fact becomes illiberal.”

UMass administration did not respond to a request from The College Fix seeking comment, but they did respond in a statement to MassLive.com.

Katherine Newman, senior vice chancellor for academic affairs and provost, stated that “a careful review of the UMass Amherst undergraduate curriculum reveals that these topics [referenced in the petition] are the focus of many courses offered by a range of academic departments within the humanities, the social sciences, the Isenberg School of Management, and the School of Public Health and Health Sciences, to name but a few locations.”

“We welcome further dialogue from any corner of our student body and faculty community and commend students who have brought their concerns to us,” she added.

Although school officials may believe that they cover a diverse breadth of topics, Wiggins responded by saying, “Many can agree there is a difference between a class like Jewish Art and a class that studies Jewish texts like the Talmud and the Torah.”

Wiggins said his wish is that “the petition encourages students on other campuses to voice their opinions as well. All students deserve an education immersed in intellectual debate.”