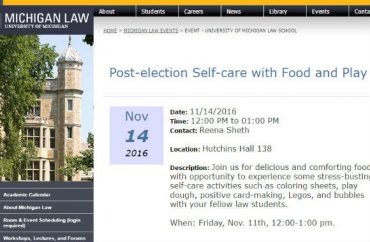 Like many other universities this week, the University of Michigan Law School scheduled an event designed to help students recover from the trauma of Republican Donald Trump’s election victory.

Unlike other schools, UMich Law was apparently so embarrassed when the Nov. 14 event made the news that it deleted the event listing.

Join us for delicious and comforting food with opportunity to experience some stress-busting, self-care activities such as coloring sheets, play dough, positive card-making, Legos, and bubbles with your fellow law students.

Writer Dillon Cheverere said the event does not appear to be “a joke”:

I want it to be a joke so badly, but it is not a joke. It’s real. Students have the chance to “post-election self-care” by decompressing and enjoying snacks and playing with toys designed for toddlers.

Apparently the school got mercilessly mocked for this, because as of Friday afternoon, the event listing has been scrubbed from the law school’s events page. It’s still cached by Google, though. The cache timestamp is Thursday just before noon. According to Google’s cached version of the event page, the law school also scrubbed a different event hosted by Sheth, titled “Leaders at their Best: Resiliency, Self-Compassion, and Play.” The description of the Nov. 16 event, whose cache timestamp is Oct. 27:

Would you like to be happy, hopeful, and empowered? Join us for exciting, fun activities that will help develop resiliency and strength-based coping through self-compassion, active gratitude, and play. Participate and win exciting rewards! The cached event page (from late Thursday night) also indicates that the law school had already planned a Nov. 15 post-election panel discussion with three law professors – but not a Nov. 16 “pop-up panel” on the election results (cache timestamp: Friday at 11:10 a.m.), hosted by the “Educational Environment Committee”:

The presidential election of 2016 was contentious and polarizing. The results seemed to defy the predictions of pollsters and pundits. Join us for a panel discussion, with an opportunity to ask questions.

It helpfully discloses that the food being served is not pizza.

The appearance of the self-care event on the cached event page, but not the pop-up panel, suggests that the former was repurposed as the latter sometime Friday morning.

The College Fix has asked the law school for comment.