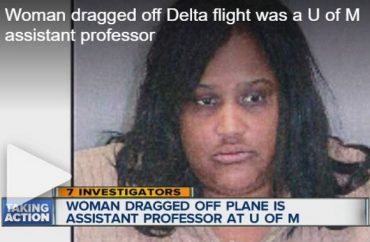 A woman recently dragged off a plane by airport authorities is University of Michigan assistant professor Rhima Coleman.

According to her faculty profile, Dr. Coleman specializes in biomedical engineering.

Earlier this month, she allegedly would not comply with boarding gate procedures and refused to walk off the plane when asked by officers, so she was dragged off by her wrists and ankles as passengers filmed the incident, several Michigan-based news outlets report.

“We’ve learned she had blown past the gate agent, boarding unlawfully, refusing to properly check her bags and then refused to get up and leave the aircraft. All the while she was cursing at responding officers who begged her to walk out on her own,” reports ABC Detroit (WXYZ).

A university spokesperson told MLive Coleman’s status as an employee at the college has not changed following the airline incident, and that according to the University of Michigan salary report, Coleman earns $102,849 a year.

Coleman is slated to be arraigned Jan. 18 on a misdemeanor charge of disorderly conduct, the Michigan Daily reports.