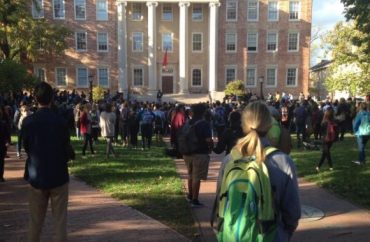 ‘This is white America’s problem. You created this system. You enabled this. You fed it. You nurtured it.’

Those were just some of the reactions seen on campus Wednesday as roughly 100 University of North Carolina Chapel Hill students walked out of class in protest of Donald Trump’s victory in the presidential election the day before.

The students gathered in the quad and spoke of the “devastation” they felt at the election results.

One black student told the crowd he hadn’t gone to any of his classes that day because he “could not be in really white spaces.” Another student speaker called for destruction. “It literally all has to go,” he said, “it has to burn, it has to crash, it has to die.”

Near the quad where the rally took place chalk writings on the ground read: “A vote 4 Trump was a vote 4 death,” “fuck ur privilege,” AmeriKKKa has elected a racist,” “fuck str8 white privilege,” “whie [sic] supremacy lives,” “Donald Trump is a racist” and “impeach Trump.”

Student Suad Jabr spoke on “dismantling the systems of oppression that keep us all complacent,” the The Daily Tar Heel reports.

And Treasure Williams, a junior at UNC, told the Tar Heel after the event: “This is white America’s problem. You created this system. You enabled this. You fed it. You nurtured it. You kept it close to your heart. You embraced it at Thanksgiving and Christmas and now we’re — people like me, people of color, women — if you are anything that’s not a white man you are feeling the pain because of this decision now.”

Student Sakile Trowers told CBS news “I was devastated by the results of this election, and I’m absolutely disgusted with the fact that our country can stand for such negative things.” At the walk out, Black Student Movement leaders announced a “people of color only lunch” later in the week, and offered to escort anyone who didn’t feel “safe” to their classes or dorm. A “healing space” was also set up in the Campus YMCA, where students could go and decompress after the event.