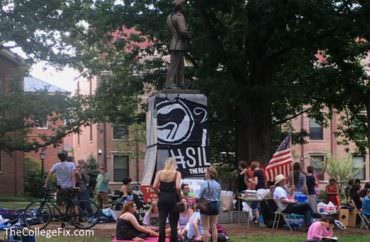 Leaders at the state’s flagship university continue to rebuff calls for its removal despite an ongoing sit-in that’s lasted more than a week and heavy political pressure.

Administrators and trustees largely blame a 2015 state law that forbids removal of monuments on public property without permission from a historic commission as the reason why they have not taken down the monument, erected in 1913 to memorialize the Chapel Hill students who left college to fight for the South.

Campus leaders have rejected and denounced Democrat Gov. Roy Cooper’s assertion that a safety loophole in the law allows the statue to be legally removed.

“We are making this statement because we are surprised and disappointed at the misinterpretations and false narratives regarding the University’s legal options on this situation … the University does not have the legal authority to move the monument,” the board of trustees stated Friday.

Meanwhile, demonstrators claim Silent Sam represents racism and white supremacy, and a small group of students have staged a sit-in around the statue over the last week, saying they’ll stay until it comes down.

That protest launched Aug. 22 with a rowdy demonstration of hundreds calling for Sam’s shuttering. Since then, a small but steady group has maintained a vigil around the monument. The effort unfolded as school resumed classes for the fall semester. A few students event spent the night and braved a little rain to continue the vigil, complaining in Twitter that they were “denied tents by university.”

Still, photos with their tweets show they are well-equipped with a picnic table and chairs to accompany their stay.

A tweet over the weekend by protesters also stated “3 white men came to the statue around 2:30 AM to threaten ‘grown men coming to get rowdy.’ Asked us what we’d do if there were guns.”

On Saturday, counter-protesters to the sit-in with Confederate and “Don’t Tread on Me” flags showed up in support of the memorial.

A Twitter account called “Silent Sam Sit In” tweeted: “White supremacists are marching around us–anyone, but especially white folks on our side- this is the time to come out and join us here.”

White supremacists are marching around us–anyone, but especially white folks on our side- this is the time to come out and join us here.

Meanwhile, Chancellor Carol Folt has become a target of angst for her unwavering decision to leave the monument up, for now. And dueling opinions on the matter have filled the pages of the local newspapers.

Rep. John Blust, a Greensboro Republican, wrote on Facebook “I cannot disagree any more than possible with modern liberalism which wishes to condemn anyone who did not hold present day views on race and equality,” reports the Herald-Sun.

In contrast, James Leloudis, a professor of history at the University of North Carolina at Chapel Hill, wrote in an op-ed in the News & Observer that “A century ago, white supremacists erected monuments to dignify the Confederate cause and posted Jim Crow signs to segregate nearly every aspect of life. The Civil Rights Movement gave us the moral courage to pull down those signs.”

“Today, our duty is to complete the work by taking Confederate heroes down from their pedestals. Doing so will not erase history. It will instead demonstrate history’s power to enlighten the present and liberate the future.”