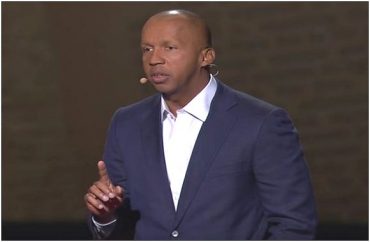 Grads at the University of Delaware’s 167th Commencement on Saturday were told by commencement speaker Bryan Stevenson that America remains a deeply unjust country that has not resolved issues of slavery, racial oppression and white supremacy.

“We are a post-genocidal society. On this continent there were native people, indigenous people, Native Americans, and they were slaughtered by the millions … by white settlers,” Stevenson, a professor at the New York University School of Law, told the grads. “I don’t think that slavery ended in 1865, I think it just evolved. It turned into decades when you had lynchings and violence and terrorism, and people of color fled from the American south to communities all over this country.”

Stevenson is founder and executive director of the Equal Justice Initiative, a nonprofit that provides legal representation to defendants and prisoners caught up in the criminal justice system.

He then reminded students about segregation, and argued that despite gains among the black community, racial inequality remains a pressing problem today.

“Also, we need to change the narrative about race in this country,” he said. “When I grew up, nobody in my community thought I could go to the University of Delaware. The University of Delaware was not a school that was perceived to be open to people of color. And today you have all of these graduates of color and it is so important that that continue, but we will not be free in this country until we deal with our history of racial inequality.”

“You see, I don’t think we’re actually confronting problems that we need to confront,” he continued. “We are a post-genocidal society. On this continent there were native people, indigenous people, Native Americans, and they were slaughtered by the millions … by white settlers. We haven’t talked about that genocide, we haven’t done the things you’re supposed to do. We had decades, centuries, of enslavement — Delaware was a slave state, this region was corrupted by that legacy, and the great evil of American slavery wasn’t involuntary servitude, it wasn’t forced labor, I believe the great evil of American slavery was the narrative of racial difference that we created to legitimate it.”

Stevenson went on to say:

Older people of color come up to me sometimes and say “Mr. Stevenson, I get angry when I hear someone on TV talk about how we’re dealing with domestic terrorism for the first time in our nation’s history after 9/11,” they say “We grew up with terrorism. We had to worry about lynchings, and violence, and that history is something that we haven’t dealt with. And we have to change that narrative.

Even, when we talk about segregation and civil rights, we’re too celebratory when we talk about the civil rights movement. We did something terrible in this region by tolerating segregation, segregation was awful. We told black people “You can’t vote” just because you’re black. We said to people of color “You can’t go to school with the rest of us” because you’re a person of color. My parents were humiliated, my father was humiliated every year of his life with signs that said “white” and “colored” that weren’t directions, they were assaults. And we have to change that narrative.

And I believe that there is a presumption of danger and guilt that we tolerate for too many people in our society, and to change that we’ve got to change the narrative, we should’ve committed to a process of truth and reconciliation, but we didn’t do it.

Regarding that “truth and reconciliation,” Stevenson argued that the United States needs to confront its history in a manner like South Africa, Rwanda, and Germany.

When introducing Stevenson, Provost Domenico Grasso highlighted his legal work, and made note that EJI also represents people who have also committed serious crimes — but stated how Americans treat folks like these speaks to what we are as a society.

A Delaware native, Stevenson graduated from Harvard Law School and currently is a law professor at the New York University School of Law. His book, “Just Mercy,” is a New York Times bestseller and was the UD Class of 2015’s First Year Common Reader selection.

RELATED: Latina commencement speaker who took jab at Trump booed, heckled: ‘Get off the stage!’