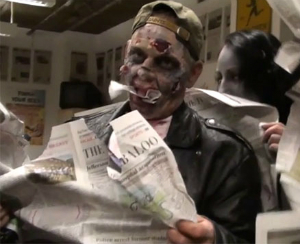 It’s not often that a university spokesman becomes such an ass that he’s stopped from dealing with the press altogether.

That’s what happened to California State University-Fullerton’s Christopher Bugbee last week after the editorial board of the Daily Titan, the school paper, called him out personally for being “rude and unprofessional” with the paper’s reporters going back “years”:

CSUF media relations officials block the Daily Titan’s access to administrators and require reporters to submit all questions through email, denying requests for in-person or phone interviews. When a response is received, sometimes more than a month later, the information it contains is often watered-down, filtered and written by a media relations officer. …

Even a story about the university swapping grass lawns with drought-tolerant plants was met with obstruction and a refusal to grant an in-person interview with an official. For weeks, the reporter corresponded with Christopher Bugbee, the director of Media Relations as he served as a go-between between the reporter and administrators.

In an email forwarded to the Daily Titan on Nov. 5, 2014 answering the plant inquiry, Bugbee made this remark to a university official about answering a reporter’s question: “Handled—off the hook ‘til early next week. I’m hoping they’ll get tired of this and go with what they have.”

The paper said it “almost never” gets an in-person interview when it goes through Bugbee’s department, and now even the campus police – with whom it’s had a “long, cordial relationship” – has been forced to go through Strategic Communications to respond to requests.

The paper also got “unanimous” backing from communications faculty and the Academic Senate in resolutions, and now the California Newspaper Publishers Association is weighing in, Voice of OC reported:

By causing long delays before providing information to the student journalists, limiting the information that ultimately is made available and barring journalism students from interviewing administration officials, [association attorney Nikki Moore] said administrators may have adopted a “soft” form of censorship or punishment.

Not only would that be illegal, she said, the result could impact the quality of the journalism students’ education, “which is the purpose for them being there.”

Reporters at Voice of OC and OC Weekly can’t stand Bugbee either, the article says, describing their own interactions with the flack (our slang for PR folks, also stylized “flak”). Here’s how Bugbee responded to attempted coverage of an alleged campus rape:

“’Please be advised that for all queries of a non-emergency nature, faculty and staff have a minimum of three work days (Monday through Friday, when the University is in session) to respond to media requests for information,’ Bugbee wrote at the time. ‘Please factor this time into your planning and deadlines.’ When the responses didn’t come when promised, Bugbee followed with, ‘we won’t stiff you and this isn’t a stall,’ without any prompting or accusation of the sorts.”

At a meeting Thursday with the Daily Titan‘s editors, the head of university advancement promised editors they’d never have to deal with Bugbee again, though they’re still stuck with Strategic Communications, the paper said.

DePaul University’s student paper added its voice to the gripes about hostile spox (as “we” also call them) in an editorial Monday that blamed the Obama administration for setting a bad example:

The university has tried to control its message through a variety of methods: forcing interviews to be approved through the Office of Public Relations and Communications (OPRC), asking for emailed questions ahead of the interview (often needing them at least three days in advance) and requiring the interviewer to stick to the approved questions, disallowing any follow-up questions. Or, being denied for interviews completely. …

It’s difficult if not impossible to get the real information they need, often it’s just watered-down talking points.

Check these instructions from PR central:

In an email obtained by The DePaulia from [Feb. 24], a staff member who was contacted for an interview deferred to Carol Hughes, executive director of OPRC, because they “were told to go through (OPRC) with all media requests.” When Hughes responded to the staff member, she encouraged the staff member to ask to “review (the student’s) article for accuracy and nuance.” Giving a source a story before it’s published gives someone a chance to change what they said, to go back on their comment when seeing it in context. It’s not truthful, it’s not honest. It’s not acceptable for any level of journalist, from a professional to a college student. It’s not journalism.

The editorial goes after the Catholic university’s athletic department in particular for cracking down on sports reporters when the softball team started sucking this year: The coach won’t comment or let players comment, and the pitching coach even required an interview to only include “positive questions.”

What the hell does that even mean? How’s this for positive: “Certainly you’ve hit rock bottom by now, so you can only go up, right?”

Surely administrations must know that this centralized crackdown on university personnel speaking their own words in a timely fashion just leads to more leaking, more comments on background, more documents getting posted online or sent to the local media? Less control over the story? Stuff for which we’ll still ask the administration for comment, of course, but its lack of response before kingdom come won’t stop us from actually running the news?