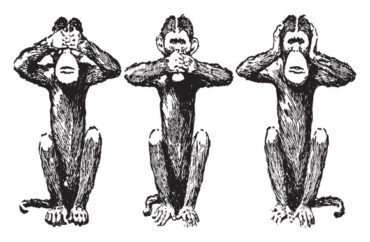 Experts in the field differ: ‘The monkey is a sacred being. They are vehicles of delight’

Academics at the University of York in the United Kingdom have “canceled,” so to speak, a classic symbol of wisdom due to the perception the image is offensive to racial minorities.

According to the Daily Mail, the “three wise monkeys” — which represent “see no evil, hear no evil [and] speak no evil” — had been used to advertise a university art history conference, specifically a “call for submissions” for the online event “Sensorial Fixations: Orality, Aurality , Opticality and Hapticity.”

But conference organizers have since apologized for the “oppressive racial stereotype.”

“Upon reflection, we strongly believe that our first poster is not appropriate as its iconology promulgates a long-standing legacy of oppression and exploits racist stereotypes,” the organizers said in a statement. “We bring this to your attention so that we may be held accountable for our actions and in our privileges do and be better.”

The Japanese symbol of the three wise monkeys was used to represent a postgraduate conference about the sensory experiences of the body, and it also appeared on a document that asked for submission of research papers to the conference on a range of areas, one of which included papers that represented black, indigenous and people of colour.

It was considered . . . that a monkey, which has been used in a derogatory way in the past, could cause offence in this context, despite this not being the intention of the organisers, so the image was removed.

But the monkeys have their origin in the Tendai school of Buddhism where they’re considered “helpers for divine figures.” Those familiar with Japanese culture say the university is overreacting.

“The monkey is a sacred being. They are vehicles of delight,” said Lucia Dolce who’s studied Japanese Buddhism at the University of London for two decades.

Eight years ago, a UK employment tribunal ruled that “no reasonable person would interpret” the three wise monkeys image as “racist.”

MORE: U. York savaged for saying men ‘under-represented’ in some academic fields