American University apparently doesn’t want to become the next Mizzou.

The private university in Washington, D.C. banned the local off-campus media from covering protests Tuesday in response to a banana-hanging incident that was widely seen as a racist message.

Reporter Matt Holt for The Eagle, the campus newspaper, tweeted that the university had “booted” reporters for NPR affiliate WAMU – which is based at American University – as well as local radio station WMAL and the Fox affiliate in D.C.

Tom Lynch, a reporter for the NBC affiliate, responded to Holt’s tweet to share his own treatment by the administration.

“I was removed from campus and told I was a ‘liar’ when I showed my student ID,” he wrote, noting American University has a journalism school.

I was removed from campus and told I was "a liar" when I showed my student ID, amazing stuff from a university with a comms school https://t.co/VnM7qlCDqa

Fenit Nirappil of The Washington Post, an alum of the J-school, piled on, tagging AU’s School of Communications.

This is disgusting. Shame on @AmericanU. Every @AU_SOC professor and administrator should condemn the school trampling press freedom https://t.co/ZkWZcOhKeN

Soon enough, a faculty member in the J-school weighed in. “This is not ok,” tweeted Margot Susca, who directs the university’s master’s program in journalism.

This is not ok. Transparency is a must here. Thank you @unclehizzy for the information. https://t.co/myef1S44l4

The administration is “allowing us to cover it,” Holt said in a followup tweet, referring to The Eagle. “Nobody else though it seems.”

The administration did not immediately respond to a College Fix query Tuesday night about its handling of off-campus journalists.

‘Divest from paying y’all’s tuition and cut their resources’

American University upgraded the banana incident to a “hate crime” in a campuswide announcement Tuesday. It said campus police were being assisted by city police, promising the “response will be as swift and strong as possible.”

It held a “community meeting” to discuss the banana-hangings in the afternoon, and offered “one-on-one drop in conversations” in the evening with members of the President’s Council on Diversity and Inclusion.

It told students they don’t “belong here” if they don’t believe in “principles of diversity, inclusion, common courtesy, and human dignity.”

The Eagle reported that President Neil Kerwin is considering “a complete rewrite of our discrimination and discriminatory harassment policies” in response to the banana incident.

Tuesday’s protests included a march to the financial aid office “to request withdrawal forms as an act of protest,” and then an “impromptu town hall” created by student marchers.

They were not happy that their demands were not immediately accepted:

The demands called for mandatory expulsion for hate crimes, implementation of training programs for AU faculty, increasing the number of faculty and staff of color and improving financial aid packages for all students.

After the list was announced, administrators came forward to accept the list and say they would try to work with students on the demands. Celine-Marie Pascale, an associate dean in the College of Arts and Sciences, was met with student pushback when she did not commit to meeting the demands.

“You can suck up y’all’s anger and make sure that we are okay. We pay tuition,” sophomore Isaiah Young of the Black Student Alliance said during an exchange with Pascale. “We basically cut y’all’s checks and so therefore until our demands are met, y’all are not getting no checks. Divest from paying y’all’s tuition and cut their resources.”

The Eagle said the FBI is also involved now.

.@AUPublicSafety Director Phillip Morse says he has communicated with FBI and will meet with Civil Rights Division officer today

The university also released surveillance footage of the incidents. Campus police are offering a $1,000 reward for “information leading to positive suspect identification.” 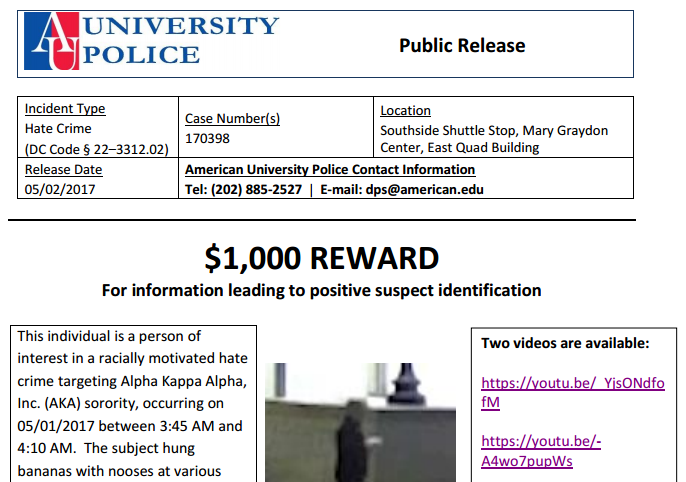 The administration is hosting yet another “campus conversation” Wednesday about “AntiRacism,” a term often used by the violent anti-fascist movement that has wrought destruction on Berkeley, Portland and other cities where left-wing demonstrations are common.

Join faculty and admin for AntiRacism and Allyship: A Campus Conversation on Wed from 10am-12pm in MGC 328. Students, faculty, staff welcome