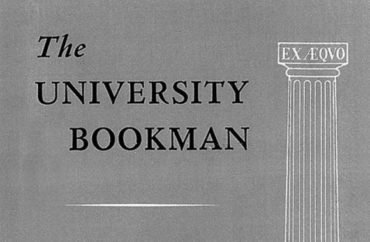 A popular conservative publication that reviews literature has stood the test of time and marks its 60th anniversary this year.

The University Bookman, founded by the late conservative icon Russell Kirk in 1960, has been “identifying and discussing books that support the renewal of culture and the common good” for the past six decades, its website states.

Gerald Russello, editor of The University Bookman, told The College Fix in an interview that the publication has endured all these many years by consistently producing important and thoughtful commentary on conversations within conservatism.

“Readers know they will find serious reviews by new and established voices that are central to the current intellectual conversations but that also are deeply engaged with the larger intellectual traditions of the West,” he said.

He added the need for the publication is as urgent as ever, that “many standalone book review sections in general-interest magazines are on the decline” while “liberal-oriented book reviews have launched.”

“Conservatives remain disadvantaged in the number of intellectual (publications available) to them,” Russello said. “The University Bookman serves as a clearing-house and nexus for the different streams of conservative thought, and open as well to serious perspectives across the intellectual spectrum.”

"The @ubookman's story exemplifies what can happen when a person of conservative persuasion takes a stand and casts a proverbial pebble into a pond. No one can predict what the consequences may be." – George Nash https://t.co/tpNxNmETVS pic.twitter.com/JSS2nX54nx

Books reviewed in The University Bookman are unique and oftentimes not found elsewhere, according to Russello. The publication team is interested in reviewing books in other languages that have not been translated into English yet such as “The Forgotten Farnese” and “The Betrayal of Arab Christians.”

Books are chosen for review based on suggestions from contributors while also trying to balance “reviews of new books that everyone is talking about, with books that deserve attention, whether new or not,” he said.

Russello told The Fix that though there are many favorite pieces from the publication, a few reviews that stand out to him are “Eduard Habsburg’s reflection on the walls of Rome, Eve Tushnet’s look at five dystopian novels, Chidike Okeem on black conservatism, Bruce Frohnen on American history, John Byron Kuhner’s review of Emily Wilson’s Odyssey and Gracy Olmstead’s on craft.”

John Courtney Murray SJ’s We Hold These Truths was published 60 years ago. @ubookman will be publishing a number of essays over the next few weeks exploring this major work and whether it still speaks to our time.

Kirk’s favorite phrase that became the tagline of the publication was “redeeming the time.”

“Our times, like all times, have their share of evils, and ours perhaps is a particularly decadent age,” Russello said. “But hope, and redemption, remain possible, so long as we keep focused on what Kirk called the permanent things.”

Jack Fowler, vice president of National Review, told The College Fix that The University Bookman is “one of the most important components of the legacy of Russell Kirk.”

“As our culture is buffeted by attacks from Marxists and ideologues and the foes of civil order, intent on the destruction of the American Project, conservatism has a pressing need for meaningful and reasoned examination of the principles that underwrite a free society,” Fowler said.

“The University Bookman, and old and wise friend, a jewel, has never been more needed than now. A dedicated platform for the discussion of new books that deserve a hearing in the public square, University Bookman is a place of sanity and intelligence and honesty.”

Russello’s advice to young conservatives would be to “avoid thinking of conservatism as a ‘movement’” and instead realize, as Kirk pointed out, that “conservatism is the negation of ideology.”

“Conservatism is an attitude toward the past and the present infused by the moral imagination, the discovery of the eternal truths of human life reflected in our literature, customs, and political traditions,” Russello said. “Conservatism is personal, in that it helps orient oneself toward virtue, then relational, since we can enact and practice those virtues best in our immediate communities; only then does it become political.”

Russello added that “to be involved with politics one first must understand the reason for and end of politics, which is the common good.”

To do that, one “should find some good teachers, which include good books, and a community of people who can support one another in that practice of virtue and building the common good,” he said.