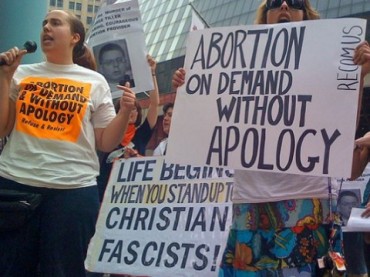 Oxford Students for Life’s debate on abortion and its effects on British culture was cancelled this week after student feminists vehemently complained that two heterosexual men don’t have the right to discuss the topic, and threatened to disrupt the event if it took place.

The debate was set for Nov. 17 and was slated to feature two prominent journalists: The Daily Telegraph columnist Tim Stanley defending the pro-life argument, and Spiked Online editor Brendan O’Neill offering the counterargument.

“Last year in Britain, over 185,000 abortions were carried out. What does this say about our national culture,” the debate’s Facebook description read. “Is it a sign of equality, or does it suggest we treat human life carelessly?”

But at least one feminist group on campus, WomCam, released a statement complaining that “it is absurd to think we should be listening to two cisgender men debate about what people with uteruses should be doing with their bodies…[We call] for an apology from OSFL for hosting this event and urge them to cancel it.”

Another Facebook protest group page, called “What the fuck is ‘Abortion Culture’?” encouraged its members to “take along some non-destructive but oh so disruptive instruments to help demonstrate to the anti-choicers just what we think of their ‘debate,’” Cherwell, Oxford’s campus newspaper, reports. “The debate is criticised … as espousing…‘anti-choice rhetoric and probs some cissexism.’”

It was ultimately cancelled by student College Censors, who decided not to let Oxford Students for Life’s use campus facilities, citing potential security and welfare issues.

Oxford Students for Life is striving to find a new location for the debate, Buzzfeed reports.

“Our society exists to defend the rights of the most vulnerable, including the unborn, elderly, and disabled,” the group has stated. “We think it is essential that Oxford University allows an open debate on these issues. We’re confident that most Oxford students would prefer free speech to censorship, and we look forward to continuing this hugely important conversation.”

Stanley, writing in The Telegraph, said it’s absurd that the event was cancelled in the first place.

“The arguments against hosting the debate were spurious,” he wrote. “That only men were speaking was no reason to stop it. A) Anyone objecting to the subject matter or the virile masculinity of the speakers was free not to attend. B) A private society should be allowed to invite whoever they want to discuss whatever they want (providing it’s legal and doesn’t incite violence etc). C) The idea that an ethical issue can only be debated by the people directly affected by it is self-evidently unintelligent. And D) we weren’t debating women’s right to choose anyway but instead the effect of abortion on wider society, which does include a few men. Sorry, by ‘men’ I mean ‘cisgendered heteronormative masculine pronouns in possession of a Hampton wick’.”

Oxford Students For Life has in the past hosted female speakers. Also there have been attempts to censor the pro-life group before, which failed. OSFL has publicly asked WomCam if they would like “to co-host a debate on abortion next term” as a result of this latest brouhaha.

But Stanley writes there is something nefarious at work, that this cancellation proved “elements of the Left are working hard to define new parameters for freedom of speech. You are free to speak so long as it doesn’t offend certain sensibilities, which of course amounts to no real freedom at all.”

When asked by The College Fix, Stanley said that “I was going to argue that an abortion culture is one in which abortion is effectively on demand, it is used widely and there is little debate about its meaning and effects. The protest that stopped our discussion confirmed the latter point.”

College Fix reporter Ryan Shinkel is a student at the University of Michigan.