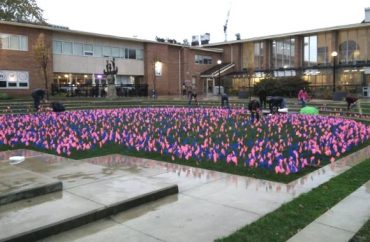 Pro-life students at Wilfrid Laurier University say they will no longer be able to put up their pro-life flag display, with campus leaders explaining such exhibits are too traumatic after one last fall caused an uproar on the Canadian campus.

Student Union President Tyler Van Herzele, in a letter shared campuswide, stated that “the visceral nature of the display interfered with the ability of some members of the Laurier community to safely attend class, travel to work or remain on campus to study.”

“The adversarial tone of the event evoked a confrontation which eliminated the possibility of respectful dialogue and created an unsafe environment for all students.”

According to his December 2016 letter, several offices, including the Diversity and Equity Office, have worked together “to ensure this does not happen again.”

In an email to The College Fix this month, campus spokesman Kevin Crowley echoed such sentiments. He noted the university “firmly upholds the principles of free speech and strives to provide an environment that protects the right of all people to engage in critical and respectful dialogue.” But, he added, “we must, however, balance the exercise of free speech with the need to support individuals who may have experienced harm related to a specific topic being discussed.”

The display in question was a project of the school’s LifeLink group. It was set up in October on the quad, with approval from the student union.

Earlier this month, Christine Schuknecht, a student at the university’s Waterloo campus and a member of LifeLink, wrote for National Post about what led to such a display being banned.

After the flags had been up for several hours, students and university employees took action against it, according to Schuknect.

The Diversity and Equity Office placed a sign by the display reading “Warning: Anti-Choice display ahead.” Special Constable Services were called after students vandalized flags and the club banner and yelled at LifeLink members. The constables did not see any issue with the display and commended members, she wrote.

Schuknect explains she was “dumbfounded.” The Diversity and Equity Office, she wrote, was supposed to be “non-partisan,” but had used “anti-choice” to describe her club.

“The DEO hangs posters across my campus insisting that students use ‘proper terms’ when addressing the groups it explicitly supports, but went out of its way to apply a negatively torqued label to ours,” Schuknect wrote.

“I was very disappointed to see that despite our efforts to stay peaceful and reserved, the group using violent tactics was being raised on a pedestal,” he said in an email to The College Fix.

Students spoke out about the display in other ways. The Cord, the campus newspaper, published “Anti-abortion demonstration in the Quad,” which wrote those at the university “were surprised” to see the flags. The article included statements from Daniel Quintia, a third-year student who admitted to pulling out some of the flags, saying he was “just frankly kind of pissed.”

The Diversity and Equity Office referred The College Fix to the Student Union when emailed for comment. Van Herzele failed to respond to emails or phone calls from The Fix.

MORE: Washington State student tears down pro-life display because it ‘really made me angry’