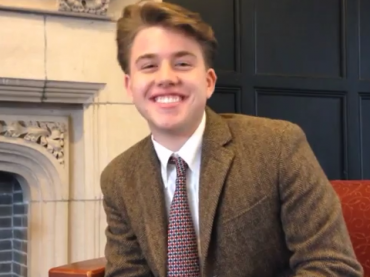 The University of Chicago’s student government plans to spend $25,000 to teach college students how to “hang out.”

The Uncommon Fund, which is maintained by the student government, allocates money every year “to encourage students to take action on campus in creative and unique ways,” according to its website.

Student Alec Goodwin proposed a “National Symposium on Hanging Out,” which received $25,000 out of the $85,000 allocated this year, according to the The Chicago Maroon.

In a less-than-serious video pitching his idea, Goodwin promises to “gather leading edge [sic] scholars in the field of hanging out” including Chicago rapper Chief Keef “for his work on marijuana and ATV-related activities,” actor James Franco, and “of course” Vice President Joe Biden.

Proposed workshop ideas include “Advanced Time-Killing,” “Maxing and Relaxing,”and “Hanging Out Vs. ‘Hanging Out,’” in air quotes. Students will also be encouraged to do their own research in hanging out, according to Goodwin.

Neither Goodwin nor the student government responded to College Fix inquiries.

The Uncommon Fund’s staff adviser, Derek Bundy, justified giving a plurality of the fund to Goodwin because his proposal requires “high-profile speakers,” according to the Maroon.

Plus, “relaxation needs to be discussed more” at the high-pressure private school, Bundy said.

Past finalists for Uncommon Fund awards truly fit its name.

That idea was pitched by Vincente Perez, previously profiled by The Fix for his apparent role in a racially charged hacking hoax that led to an FBI probe.

Other finalists sought to bring insect-based food to campus and bake the world’s largest muffin, while more down-to-earth ideas included building a climbing wall, hosting a conference on business ethics, and designating spaces for musicians to practice and perform on campus.

The Maroon editorial board has previously criticized the execution of the Uncommon Fund – which is partially funded by student fees – but not for its allocation of funding to impractical ideas.

It said in February the fund lacked transparency in how its committee members evaluated projects, suggesting criteria such as “feasibility, relevance to students, and social impact.”

The board said in 2012 that the fund, then $75,000, shouldn’t require applicants to produce a video, and faulted the selection board for not specifying how much weight it would give to student votes.

The year before, when the fund was a paltry $40,000, the editorial board criticized the Uncommon Fund for letting one of its members argue for a proposal that he himself was affiliated with, though he didn’t vote on that proposal.