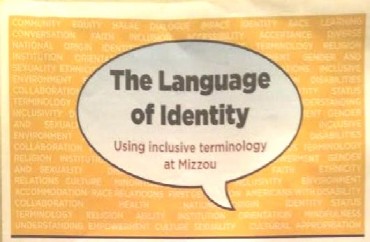 Just three days after ‘Campus Free Expression Act’ OK’d, profs told to correct peers who use words that might offend others

An administrator leading a workplace diversity seminar Friday told the 70 or so scholars and others in attendance that they should subtly correct peers who use vocabulary that some have deemed hurtful or offensive.

Attendees at the voluntary seminar were also given a four-page “inclusive terminology” document that instructs them on what words to use while interacting with others. The handout includes dozens of words and definitions deemed acceptable by campus leaders and diversity gurus.

“If you have a professor who you think might need a little bit of awareness, there are ways to bring that out to the person,” Amber Cheek, the university’s disability inclusion and ADA compliance manager, told the nearly standing-room-only crowd.

Cheek did not respond to an email from The College Fix seeking additional comment.

Friday’s event, titled “The Power of Words: Inclusive Language at Mizzou,” was meant to underscore the Chancellor Diversity Initiative. The overall message? Be on the lookout for language floating around on campus that could be perceived as potentially triggering.

“Since we strive for a culture of inclusion, here at Mizzou it is important that we are conscious of the language that we use in talking about or describing people,” a description of the event states. “This facilitated discussion will provide you with currently appropriate terminology …”

The administrative advice came just three days after students at Missouri’s public colleges were given a free pass to say whatever they want, wherever they want, through the Campus Free Expression Act.

Yet it remains to be seen how the spirit of that act – freedom of speech and expression – will play out in classrooms.

For example, a list of “Racial Microaggressions in Every Day Life” posted on the University of Mizzouri’s website in 2012 remains online today, one aspect of the public university’s effort to make the campus more “inclusive.”

The list is very similar to one used by University of California faculty leaders, and cites the following phrases as offensive microaggressions:

“America is the land of opportunity”

“There is only one race, the human race”

“America is a melting pot”

“Where are you from”

“Everyone can succeed in this society if they work hard enough”

The list also includes so-called “environmental microaggressions,” such as “a college or university with buildings that are all named after white heterosexual upper class males” as one example because it allegedly implies “you don’t belong/you won’t succeed here. There is only so far you can go.”

And “disability microaggressions” include phrases such as ‘‘I can’t believe you are married” and “come on now, we all have some disability.”

Cheek, responding to a question posed about ways for people to avoid able-bodied privileged status over a person with disabilities, said helping people who appear to need a hand may be one example.

“I have had so many people stick up for me when I really didn’t need them to. Unsolicited actions, such as helping a person in a wheel chair or sticking up for a woman in a group setting, can be patronizing and offensive,” Cheek told attendees.

“There are (many) people with invisible disabilities, so it’s not always obvious when we are talking about them offensively,” Cheek added. “It’s best to be respectfully curious in case you are not sure if someone might have a disability, whether visible or not.”

Administrators, faculty and students at the seminar were told to stay away from microaggressions during the discussion-oriented event, coordinated jointly by the Chancellor Diversity Initiative and the Trans Student Educational Resources at the University of Missouri-Columbia. Reaction to the event was mixed.

One employee, Craig Benson, who works at the school’s Career Services Center, told The College Fix that employees need to be careful not to use words that turn people into “the other” in society.

“We (the university) need more discussions on how to celebrate the individuality of people on campus. And making sure people are aware of harmful language is one of the best ways to protect each person’s individuality,” Benson said.

But another audience member, who asked not to be named, was not as impressed by the talk, telling The College Fix she attended to gather information, and now she doesn’t know what to think.

She said the new language is a minefield, and “I am here to download as much information as possible about language so I don’t accidentally offend someone I work with.”

Meanwhile, the increase in institutional political correctness emanating from college campuses has drawn the ire of free speech advocates and liberal press alike.

The editorial board at the left-learning Los Angeles Times, for example, penned a scathing op-ed last month about the “language squelching” nature of the faculty training sessions on microaggressions at the University of California system.

“Instructors everywhere should feel free to say that America is a ‘land of opportunity’ or that affirmative action is ‘racist’ or that a student of any race or gender is ‘good in math’ without having to worry that they might inadvertently be offending someone,” the editorial noted about UC President Janet Napolitano’s mission to banish microaggressions from the Golden State’s college campuses.