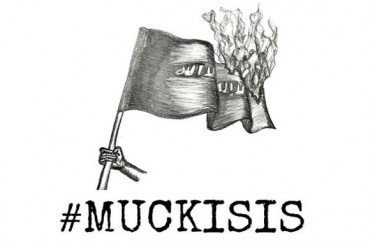 A student liberty group at the University of Missouri-Columbia plans to burn the ISIS flag in the center of their campus this Thursday in what they are calling a symbolic ceremony in response to continual human rights violations by the Islamic State in Iraq and Syria.

“ISIS has violated the liberties and freedoms of millions of people through genocide, deadly religious persecutions, modern-day enslavement, sexual violence, use of a chemical weapon, beheadings and mass executions,” MU-Young Americans for Liberty stated in announcing the event.

The afternoon demonstration will include “a moment of silence for the estimated 250,000 plus murdered by ISIS, followed by brief speeches and will conclude with the burning of the ISIS flag,” the statement added.

Ian Paris, 21, president of the Mizzou chapter of YAL and a senior studying political science, told The College Fix in a telephone interview Monday that his group reached out to other campus clubs – religious ones, political organizations, social justice advocacy groups and more – and many peers have expressed an interest in taking part.

“There’s a coalition of students that are coming together,” Paris said, noting that group is calling itself the “Missouri University Coalition for those Killed by ISIS.” It is not an officially recognized campus organization, he added.

“I am hoping we use this to unify our voice and maintain our message,” Paris (pictured) said of the ceremony. “I want this event to open the dialogue … about U.S. foreign policy in the Middle East rather than it just be a one-off thing.”

In announcing the event, YAL also called on the U.S. government to withdraw financial and military support for foreign countries with ties to ISIS, adding the group “does not condone ongoing U.S. and allied military action against ISIS in Syria and Iraq.”

Paris said he’s not worrying too much about ISIS hearing of the demonstration and trying to retaliate.

“If I succumb to the fear of ISIS objecting to my actions, I have succumbed to the terrorists,” he said.

As to how students feel about the event, he acknowledged it’s not all positive. “Some people have voiced concern that a flag burning protest won’t effect change, but you would be surprised how many students I have spoken with that have asked me questions like, ‘Who is ISIS?’ ‘What do they do?’ So the first step to effecting change is initiating a dialogue. Only then can we take a positive step forward in stopping radical Islam in the Middle East.”

Paris said he and his peers have reached out to Muslim students on campus to take part in their event as well.

“I consider it a very wholesome religion,” he said of Islam. “It’s not mine in particular, but I am filled with regret and sadness when people around me associate Islam with ISIS. ISIS has perverted and distorted the true values of Islam, which I consider one of the greatest atrocities they have committed.”

As for setting fire to an ISIS flag in the center of campus, Paris said his group requested an “open flame permit” for their event, which also sought permission to host a “general rally” that includes a barbecue. He said the request was approved by campus officials.

It’s unclear if administrators knew exactly what the students’ plans were when they signed off, although the permit did state “flag” in conjunction with the open-flame request, Paris said.

“That administration will try and shut us down has been a rising concern, especially with increasing unrest with increased racial tension on campus, and an increased trigger warning atmosphere,” he said.

“Obviously burning a flag is protected speech under the First Amendment,” he added.

Meanwhile, getting an ISIS flag was no easy feat.

A private business the group approached to make them one refused. They also did not want to buy one from an outlet that supports ISIS. Ultimately they turned to art students to make one from scratch, Paris said.