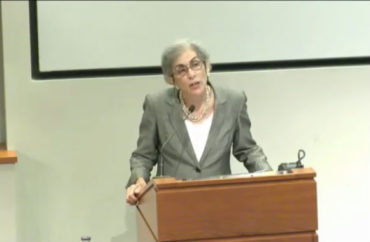 ‘Privately, faculty members have told me that their experiences match those of Wax’

The University of Pennsylvania might have thought that its punishment of Law Prof. Amy Wax – yanking her first-year classes because she said black student performance was mediocre – was a fair compromise.

But now its gutless move has cost the Ivy League school perhaps its most decorated trustee, who also served as an “overseer” of the law school.

Paul Levy sent his resignation letter Friday to President Amy Gutmann and also shared it with The Daily Pennsylvanian. He technically served as an “emeritus” trustee, as you can see from this Google cache from Monday morning, but he’s been practically synonymous with Penn Law for decades.

The private-equity magnate, former lawyer and 1972 Penn Law grad’s name is on the Levy Conference Center and the Levy Scholars program. He paid for part of Golkin Hall and helped set up the law-business joint programs at Penn’s Wharton School. He chaired the Board of Overseers for seven years. He “led the last Campaign for Penn Law which more than doubled its stated goal of $75 million.”

Penn even feted him with the “Alumni Award of Merit” in 2016, as you can read here.

And Levy is mad as hell that Penn Law Dean Ted Ruger left him in the dark before publicly declaring open season on Wax and sending her to the doghouse:

Penn Law has entered the world of micro-aggressions and “snowflakes” and that is not a world I choose to be part of.

In his three-page letter to Gutmann, Levy rips the top brass at both Penn Law and the university a new one.

He says Dean Ruger conspicuously left him out of the alumni who were asked for their views before Wax was demoted, “and I wonder if he consulted any senior members of the faculty who might have objected.”

Wax’s “public” removal from teaching first-year civil procedure, a mandatory class, was “punitive and you have apparently done nothing to stop him,” Levy writes:

Preventing Wax from teaching first-year students doesn’t right academic or social wrongs. Rather, you are suppressing what is crucial to the liberal educational project: open, robust and critical debate over differing views of important social issues.

When Wax’s colleagues “gang[ed] up on her in a letter of outright condemnation” in response to Wax’s op-ed praising “bourgeois values” last fall, it “demolishe[d] the facade of open intellectual debate at the Law School” – and the dean piled on:

Ruger authorized an official law school statement dissociating the school from her views (as if anyone under the circumstances would have thought the op-ed was the Law School’s position). Then he criticized her directly in an op-ed, while piously pretending to protect her by hiding behind the banner of free speech. An associate dean, Polk Wagner, also publicly criticized Wax, undoubtedly with Ruger’s permission if not outright encouragement.

Ruger has made clear to faculty that they will face his wrath if they dare to express “unpopular views” within the law school – and that he won’t even provide evidence when they are charged with wrongthink:

Ruger has said that Wax is wrong about her affirmative action students’ performance, but won’t give data to back up his views. One of the Overseers keeps saying to me: “Paul, Amy is wrong!” I say: “Well, I hope she is, but what are the facts?” He says: “Well, Ruger said she’s wrong; that proves it.” Really? Privately, faculty members have told me that their experiences match those of Wax.

Because Ruger has publicly said that Wax was wrong, it might be nice to know how various groups have fared at Penn Law. Each year at graduation the Law School announces membership in Order of the Coif and other honors based on grades; we know who those people are. We also know who gets clerkships. Why are general data that would help us assess the merits of racial preferences being suppressed? … If [Wax] is wrong, then so much the better. Wax would no doubt be thrilled. However, if Wax is right, and the data are available and she is punished for talking about her experiences over two decades of teaching, the University has effectively constructed a cynical firewall to suppress all discussion of affirmative action: It won’t comment on its existence or student outcomes, and it punishes others for commenting publicly on student performance. That hardly seems to pass the test of intellectual inquiry expected of a university. What are the Law School and the University afraid of?

Paul S. Levy’s resignation letter to the University of Pennsylvania in response to Amy Wax punishment by The College Fix on Scribd

Based on its treatment of Wax, Penn apparently believes in an “‘I’m okay-you’re okay,’ back-slapping, Pollyanna culture” that shies away from controversial debates, Levy writes.

He systematically deconstructs Ruger’s privacy and “falsehood” rationales for punishing Wax: She made “general comments about students’ grades over a 17-year period”; she couldn’t have been referring to current students in her fall interview with economist Glenn Loury “because they hadn’t been graded yet”; and Penn Law itself just sent Levy a “sickeningly saccharine” email about diversity on the Law Review, which offers “a patent stand-in for race” in the form of “a separate track for admission based on personal history.”

Penn’s theories about Wax, a 15-time Supreme Court litigator, aren’t even coherent, Levy continues: “Her [civil-procedure] exam is a multiple choice, computer-graded exam so there can be no plausible argument that she grades discriminatorily.”

This is the mother of all slippery slopes for anyone who falls anywhere outside law-school orthodoxy:

There is not a shred of evidence that Wax treats her students unequally. Removing Wax from the required curriculum sends a clear message to the entire university community: If you express unpopular views, even though there is no evidence that the learning environment is compromised, you will be punished.

A spokesperson simply told the Daily: “Teaching assignments are handled exclusively at the decanal level, and Dean Ruger has thoroughly explained his thinking on the matter and the Administration supports his decision.”

Thoroughly, perhaps. With evidence or good faith, not at all. Penn had better hope its other trustees aren’t looking as closely as Levy – or taking his calls.

MORE: Penn professor denounces those who ‘vilify’ and try to silence Wax