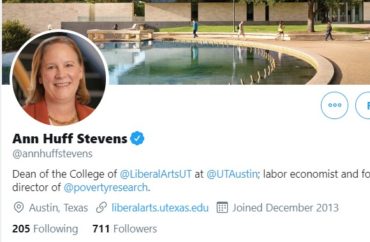 If you use the phase “Chinese virus” as shorthand to describe the novel coronavirus that creates the illness COVID-19, you are “fuel[ing] acts of hate that have no place in our university, our community, or our country.”

That’s what the dean of the University of Texas College of Liberal Arts told her community in a Friday email forwarded to The College Fix. Ann Huff Stevens even connected the phrase, which refers to the geographic origin of SARS-CoV-2, to “several reports of harassment” the college has received.

A spokesperson for the college denied that Stevens was ordering the community not to use the phrase after The College Fix noted that a free speech group had rebuked the University of California System about a similarly worded warning to its community, saying it violates the First Amendment.

In recent days my colleagues and I have received several reports of harassment directed at Asian American graduate students as well as students from abroad who are seeking advanced degrees from the university.

At a time when Americans need to come together to face a serious pandemic, the COVID-19 outbreak has instead sparked anti-Asian xenophobia both here in Texas and across the U.S.

Using language that encourages others to view a crisis in overly simplistic geographic or racial terms — for example, referring to COVID-19 as a “Chinese virus” — fuels acts of hate that have no place in our university, our community, or our country.

She implies that using the phrase “Chinese virus” or other negative references to the Chinese government, which initially arrested people for discussing the virus, is a punishable offense at UT:

I urge everyone in the UT community to call out and strongly oppose words and deeds that are fueled by ignorance and hate. And for those of us who work and learn at UT, please remember that harassment of any kind should be reported immediately to appropriate university authorities. 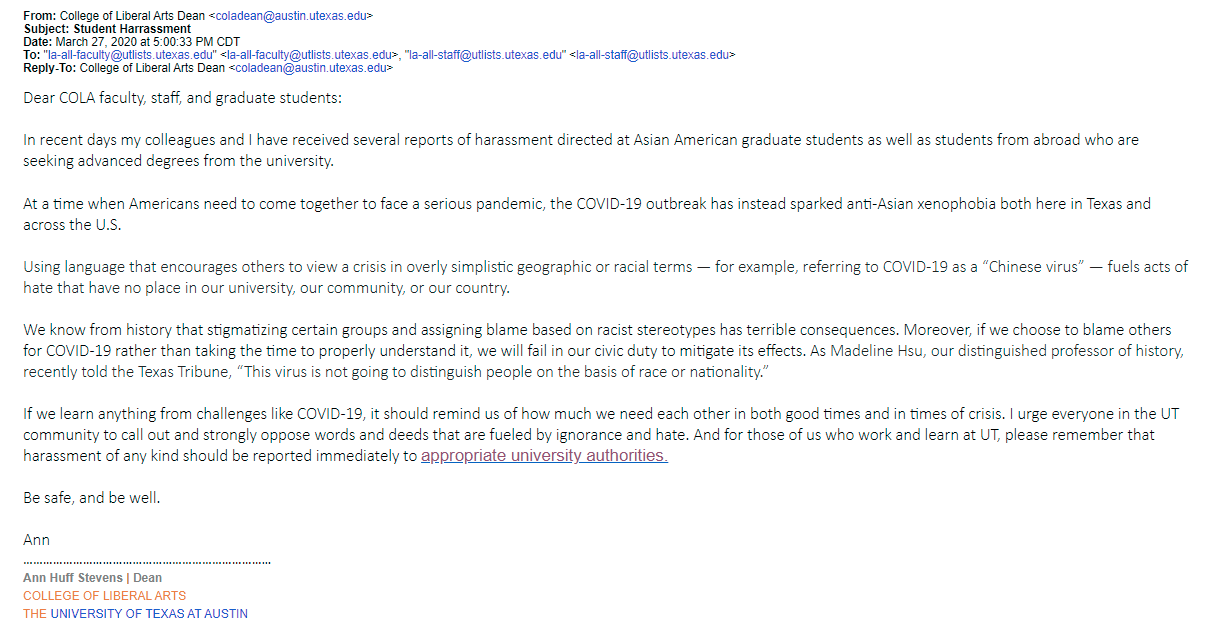 The Fix asked Stevens on Sunday to specify the exact wording or behavior behind the “several reports of harassment” she mentioned, and to clarify that she did not mean using the phrase “Chinese virus” toward a student of Asian origin constituted harassment.

David Ochsner, director of the Office of Public Affairs in the College of Liberal Arts, refused to provide the details of the reported harassment, citing “the interest of protecting both the safety and the identity of those students.” The Fix did not ask for any identifying information about victims of alleged harassment.

Asked how Stevens’ email to the community did not have the same problem as the University of California’s directive, which the Foundation for Individual Rights in Education said “appear[s] to ban speech outright,” Ochsner wrote in an email:

The Foundation for Individual Rights in Education acknowledges the right of government actors, such as the Centers for Disease Control and the World Health Organization, to advise people on the public health reasons for not associating a disease with a country or origin. The CDC specifically warns against creating “social stigma … towards Chinese or other Asian Americans or people who were in quarantine” for COVID-19. FIRE also upholds expressive rights to use a phrase like “Chinese virus,” a principle Dean Stevens agrees with, even though she finds the phrase offensive and counterproductive. She did not instruct anyone to avoid using the phrase, but did exercise her own expressive rights to suggest that using such phrases have consequences, whether they lead to harassment or hinder efforts for people to come together to confront challenges associated with the pandemic.

The Fix has asked Ochsner in a followup Sunday night how Stevens’ language can be squared with his novel interpretation of her email, which urges members of the community to “call out” those who use “Chinese virus” and implies that the phrase constitutes harassment that they should report.