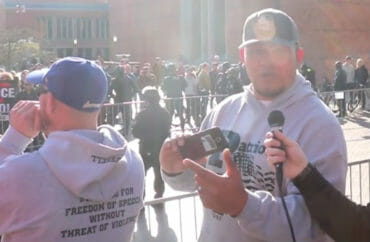 Students that want to host campus events with speakers expected to draw violent responses won’t have to pay “enhanced” security fees to the University of Washington – for now.

In fact, the taxpayer-funded institution is ditching mandatory security fees altogether to settle a lawsuit by the campus chapter of the College Republicans.

A federal judge blasted UW in February for hitting the College Republicans with a $17,000 “enhanced” security fee in order to host the conservative group Patriot Prayer, whose rallies at the University of California-Berkeley last fall drew leftist counterprotests.

The university will pay $115,000 to the group that represented the CRs, Freedom X, and their Seattle lawyers $7,500 as part of a settlement ending the litigation.

The policy under which they were asked for the security payment – never actually paid – is going away:

[The interim policy shall read:] RSOs shall not be charged or assessed security fees for speakers except in connection with security staffing levels or other measures specifically requested by the RSO or by an RSO’s invited speaker. Nor shall RSOs be charged or assessed fees based on the content or viewpoint of a speaker’s speech or based on the community’s reaction or expected reaction to an invited speaker.

But UW suggested this fee-free policy will be short-lived. The settlement gives it permission to devise “a constitutionally permissible security fee” for such student events, following “participation” by the university community and approval by the regents.

The university has been mum about the settlement on its news page and President Ana Mari Cauce’s blog, which has a post today decrying something irrelevant to the university: the Trump administration’s border policy. It’s also citing LGBT pride today to distract the media from the settlement.

As a psychologist, I've worked with children separated from their parents – their pain is real and the health impacts are often lifelong. To knowingly inflict this trauma is a stain on our national character. New post: https://t.co/qW4tKzU7LV

The #Pride Flag is up on campus! 🏳️‍🌈 pic.twitter.com/pfhBTGTSPQ

A spokesperson told The Seattle Times that the university “strongly supports a free and open exchange of opinions and ideas” and portrayed the settlement as a victory because it “preserves our ability to develop a long-term solution that balances free speech and campus safety without passing the burden of sometimes significant security costs on to all students.”

The administration was on the wrong side of not only Judge Marsha Pechman, who said its policy punished speech that was “likely to draw opposition,” but also nearly two dozen of its own law professors.

They went so far as to compare the policy unfavorably to segregationist Gov. George Wallace, who did not attempt to charge civil-rights activists for court-ordered security on their march from Selma to Montgomery.

In an email blast Monday, Freedom X President Bill Becker said UW was wise to settle rather than risk a victory by the CRs that “would have set important legal precedent for other courts to follow,” though the steep price the university paid should serve as a deterrent to other universities.

It also teaches “the leftwing activists who call themselves antifascists … a lesson in constitutional law and what freedom of speech really looks like,” he said:

It is fascism – not antifascism – to storm a public university campus with the goal of forcing the cancellation of politically conservative events. The UW College Republicans stood up to them, and to a university that intentionally or not rewarded agitators through its discriminatory security fee policy.