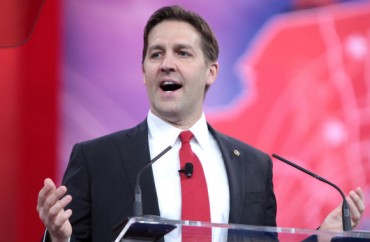 First-term Sen. Ben Sasse, Republican of Nebraska, is one of those names I hear occasionally but my thoughts on him end at “how do you say that name?” (it’s “sass”). That’s about to change, because he’s taking on The Donald.

The Washington Post reports that Sasse is on a mission to derail the GOP nomination of Trump:

The freshman senator from Nebraska, who defeated a rival preferred by the establishment in a 2014 GOP primary, appeared with [Ted] Cruz last night in Keosauqua and will appear this afternoon with Marco Rubio at a pub in West Des Moines. He’s not going to endorse either of them, and he may appear with a third candidate if his schedule permits, but he’s on the ground to make the case that rallying behind Trump is a very bad idea for the party.

Sasse sent a stream of probing tweets Trump’s way Sunday night, the most controversial of which asked if he’s “repented” for having so many admitted affairs with married women. (Iowa evangelicals tend to frown on serial adulterers.)

.@realDonaldTrump Q4: You brag abt many affairs w/ married women. Have you repented? To harmed children & spouses? Do you think it matters?

What’s interesting about Sasse is that he’s a former university president – Midland University in Fremont, Neb., to be precise. As his Senate biography says, he was among the youngest college presidents in the nation at 37 years old:

The 130-year-old Lutheran college was on the verge of bankruptcy when he arrived, but became one of the fastest-growing higher education institutions in the country by the time of his departure.

Before Sasse got his Ph.D. in American history from Yale and taught at the University of Texas-Austin, he led the Alliance of Confessing Evangelicals. The Post says he sees Trump through that historian lens as

a sort of paternalistic “strong man” and doesn’t understand the essence of the American experiment. “He’s running with this claim that he’ll be the strong man that can take care of everybody,” Sasse said, adding that it’s “ironic” he is nervous to field questions from Fox moderator Megyn Kelly [at Thursday night’s GOP debate].

If Trump follows through on his threat to sit out the debate, I propose that former university chief Sasse debate Trump’s highest profile supporter from the academy, President Jerry Falwell Jr. of evangelical Liberty University.

Falwell explained in a Washington Post op-ed Wednesday that he has personally (not institutionally) endorsed Trump because he sees America in the same place that Liberty was in its early days:

Over two decades of struggles, Liberty eventually moved from the edge of bankruptcy to become the most successful and prosperous Christian university in the world. I believe the United States is now where Liberty University was in the early 1990s, and we need an experienced businessman who has bought troubled companies and turned them around, sometimes through bankruptcy laws.

Liberty never had to file bankruptcy, thanks to God’s blessings, but we did go through tough times and painful debt restructuring in the 1990s. I believe the United States is very sick financially and might not survive another four years of Obama-style leadership.

Experts say that if our debt climbs from $18 trillion or $20 trillion to $24 trillion, we will reach a tipping point from which our nation cannot recover. At this stage in our history, I believe we need an experienced and successful businessman who has fixed broken companies — because I saw firsthand as a young lawyer the tough measures that were required to save Liberty University.

We should all ask C-SPAN to carry a Sasse-Falwell debate, because who cares about about another undercard debate?