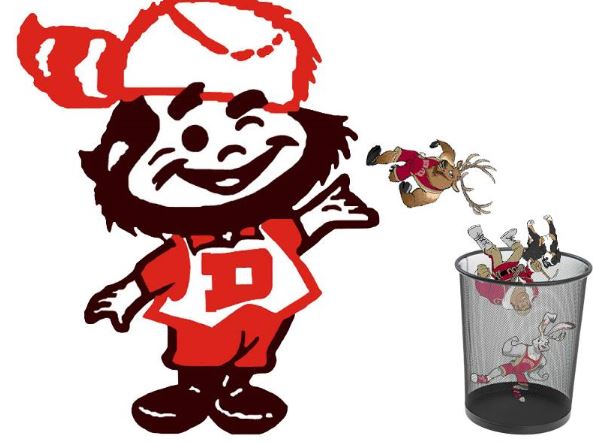 Despite pleas and campaigns by alumni, students and fans, University of Denver would rather have no mascot at all than one that represents America’s frontier heritage.

Administrators refuse to bring back the much-beloved pioneer mascot “Denver Boone,” which officials have apparently deemed too white-skinned and offensive to represent the school.

Various efforts to reinstate Boone – a cartoony image with a coonskin hat and big smile who was scrapped as the campus mascot in 1998 – have not moved campus officials.

“Boone was a polarizing figure that did not reflect the growing diversity of the DU community, but rather was an image that many women, persons of color, international students and faculty members found difficult to relate to as defining the pioneering spirit,” stated Chancellor Robert Coombe in a March letter to the campus community.

But some student leaders pushed back.

“We believe that it is time for all of us to join together in recognizing Boone’s place in our school history and move forward with a new, inclusive, forward-looking mascot symbol,” DU student government presidents Sam Estenson and Parker Calbert stated in an April email to students.

But earlier this month, a 76-member committee of faculty, students and alumni that had conducted surveys and dozens of public forums on the issue decided it would not recommend any new mascot. The panel had considered images such as a mountaineer, elk and jackalope – but never weighed Boone among the contenders. Even though the committee acknowledged the mountaineer gained the most support from those surveyed, panel members could not come to a consensus on a recommendation, the DU student newspaper The Clarion reported.

In interviews with The College Fix, students and alumni expressed frustration over the recent decision.

“Opposition to Denver Boone was self-indulgent, hypersensitive political correctness from its inception,” said Mike Rosen, a talk-radio show host with the Denver-based 850-KOA station and an MBA graduate from DU’s school of business. “Denver Boone is fun and harmless. The problem isn’t with the mascot, it’s with the sanctimonious crybabies that have made this an issue. … As an alum, I’m disappointed.”

Twenty-year-old junior Alex Johnson, president of the DU College Republicans, said that while it’s important to respect various members of campus, this mascot issue was taken to a ridiculous level.

“This diminishes campus culture,” Johnson said, noting having no mascot is uninspiring for students. “This is ridiculous and embarrassing for DU students.”

Similar sentiments could be found via the Facebook page “I Support Denver Boone for Mascot of DU,” which has nearly 1,200 Likes.

In May, when the campus newspaper hosted an online poll to determine which mascot students would most prefer, Boone won big as a write-in candidate – he wasn’t even listed as an option on the survey, The Denver Post reported.

Despite all the hoopla, there are some students who say they’re more interested in the degree they are earning than the image representing them via campus athletics.

First-year law student Allison Hart, 24, told The Fix that the University of Denver has an excellent academic reputation with or without a mascot.

“I actually don’t feel it is important to have a mascot,” Hart said. “A mascot has never identified who I am, or what a school has meant to me.”