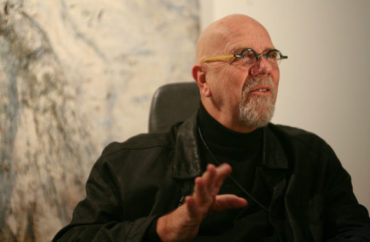 Seattle University removed a self-portrait of an internationally renowned artist following allegations that he asked women to model nude for him and they agreed but felt uncomfortable doing so.

Local alternative weekly The Stranger reports that the Jesuit school took down the work by Chuck Close, with “an estimated (pre-allegation) value of $35,000,” from a highly trafficked library corridor.

We were concerned about potential student, faculty or staff reaction to seeing the self-portrait, and decided that the prudent and proactive course of action would be to replace the self-portrait with another work.

Interview: Kiki Smith by Chuck Close “I always think the whole history of the world is in your body.” https://t.co/jx1N7UL2YM #kikismithHDK

The Huffington Post published accusations last month against Close by two women – one named, one anonymous – who both acknowledged they agreed to pose nude for him but said he made the request once they were already in his studio.

They alleged he also complimented their genitalia once nude, and offered each $200 when they left without being photographed. One said Close asked her to leave after she got dressed and asked him “questions about grad school.”

Another named woman said she refused Close’s offer in 2005 to photograph her bare breasts for his “topless” series.

Close has used a wheelchair since 1988 and “has to use a brush harnessed to his wrist” in order to paint, according to HuffPo. He’s known for his portraits of famous artists but has also done nudes, including men.

The artist’s lawyer told HuffPo that its article “will literally kill Mr. Close” if it “has its intended effect.”

The allegations recently led the National Gallery of Art to postpone a Close exhibition along with that of another artist facing similar accusations, according to The Washington Post.

The museum spokesperson said “it is not the appropriate time to present these installations” and confirmed this was the first time it has canceled exhibitions owing to public allegations against artists.

‘Pablo Picasso was one of the worst offenders of the 20th century in terms of his history with women. Are we going to take his work out of the galleries? At some point you have to ask, is the art going to stand alone as something that needs to be seen?’ https://t.co/IP8s9QyJAr

When will the appropriate time come around to present these works? How long does Seattle University have to keep Self-Portrait 2000 in storage before it can be hung again? We have a notoriously short attention span when it comes to scandals and misconduct by public figures, giving this removal an inevitable temporality. I say either burn it all or hang it back up—and cannot help but remind you, Degas used to touch the young girls he painted and is often described in history books as “haunting” and “stalking’” them. His work is still displayed everywhere.