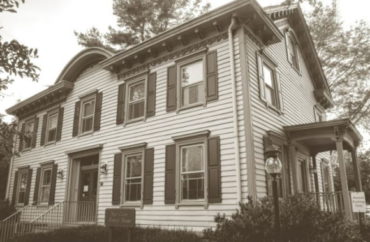 Rider University in New Jersey has changed the name of its Van Cleve Alumni House to the Alumni House after research into the namesake revealed he owned slaves.

“Van Cleve’s life included fighting for the ideal of liberty while also participating in and championing the cruelty of slavery and the degradation and dehumanization of Black Americans,” President Gregory Dell’Omo and board Chair John Guarino state in a joint letter Oct. 21 announcing the change.

“… Van Cleve chose to champion the institution of slavery even as other citizens in New Jersey awoke to the cause of abolition and the horrors of human bondage. Judged by the standards of his time or ours, Van Cleve’s actions and attitudes have no place in the Rider community.”

A temporary sign was recently erected in front of the building, and the university has plans for permanent signs and other educational materials regarding the history of slavery at Rider, according to the announcement. A new section on its website already explores the topic.

The house is located on property formerly owned by Van Cleve. Rider purchased the land in 1956, naming the building after its previous owner.

When the university recognized Van Cleve’s potential link to slavery, the Task Force on Rider and the History of Slavery convened in the summer of 2020. The committee of students, faculty, staff and alumni researched the university’s historical ties to slavery and recommended a course of action to address their findings.

“The feedback directed to me has been very positive. Many individuals remark how the information we have shared has been educational and eye-opening,” McDowell said in a Nov. 2 email to The College Fix.

The Crossroads of the American Revolution historical organization did not respond to a request from The College Fix seeking comment.

Part of the task force’s initiative included extensively researching Van Cleve. Born in 1739 in present-day Lawrence Township in New Jersey, Van Cleve was an officer in the Revolutionary War. He was also involved in government, serving as speaker of the New Jersey Assembly four times.

Van Cleve purchased the property on which Rider is located in 1773. The task force investigated whether Van Cleve had slaves on the land.

Its final report notes: “No documents have been found that give voice to Van Cleve’s opinions about slavery in his own words. However, several records demonstrate his participation in and support of slavery.”

The documents include tax records from 1778, 1779, 1786 and 1799 that show Van Cleve possessed at least one enslaved male during those years. A runaway slave advertisement from the New Jersey Gazette also suggests Van Cleve owned a female slave named Dinah.

The house was previously used for student residence and admissions, but Rider’s Office of Alumni Relations has occupied the space since 1993.