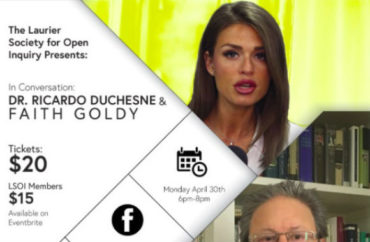 ‘No other clubs are subject to this review’

A Canadian university that investigated a graduate student for showing a debate in class is now imposing “health and safety” requirements on her student club, requiring it to move its next event to a different university.

“As far as I know, no other clubs are subject to this review,” Lindsay Shepherd told The College Fix in an email, describing the “increasingly complicated” measures that Wilfrid Laurier University is taking to regulate the Laurier Society for Open Inquiry.

Shepherd serves as president of the club, which was forced to move its April 30 event featuring the “Catholic nationalist” Faith Goldy and a professor skeptical of immigration to the University of Waterloo.

It has to charge attendees for the relocated event because the club is not getting the venue and security for free, as it would at WLU.

Shepherd said she does not have much information about why the club is facing new requirements, as “the administration is not being transparent and seems to avoid putting much in writing.”

The WLU administration did not respond to multiple inquiries from The Fix regarding the new reviews or its treatment of the Laurier Society for Open Inquiry.

Next week’s event is a redo for Shepherd’s club, which originally invited Goldy to participate in an immigration debate March 20.

Campus activists had opposed the invitation of a “Nazi,” and faculty refused to debate Goldy. It was rechristened as the first event in an “Unpopular Opinion” speaker series, with Goldy speaking alone about “Ethnocide,” but the event was immediately shut down after a fire alarm was pulled.

The new event will feature Goldy “in conversation” with social scientist Ricardo Duchesne, professor at the University of New Brunswick and author of the book “Canada in Decay: Mass Immigration, Diversity, and the Ethnocide of Euro-Canadians.”

The club said in a Facebook post Monday that it invited Duchesne to “add an academic voice” to the discussion.

Though its executive team argued whether it should re-invite Goldy, “we ultimately came to the conclusion that we should not concede victories to no-platformers. We cannot be passive in light of a campus culture that believes it acceptable to shut speakers down by the illegal pulling of fire alarms.”

It warned would-be demonstrators at the April 30 event that trying to “obstruct or de-platform” Goldy and Duchesne will only “result in more media attention being given to an event.”

“[A]pparently the university conducted an investigation but couldn’t identify a suspect” in the fire-alarm incident March 20, Shepherd told The Fix. She only heard about the investigation “second hand” even though the administration has the club’s contact information: “They refuse to directly contact us (they likely see it as legitimizing us).”

The administration has been dueling with Shepherd in the press for the past three weeks.

Shepherd tweeted April 5 that the club, which is not officially recognized by WLU, “just got an email that now we will have to get ‘Health and Safety Reviews’ done before our events (we don’t know what that means).”

It's getting increasingly complicated for LSOI to book talks on campus. We also just got an email that now we will have to get "Health and Safety Reviews" done before our events (we don't know what that means)

She told The Record that the club already had to move its previous event, a pro-immigration talk, to a local library because of a change in WLU’s booking policy. The move cost the club more than $400 for rental and security fees.

The administration told the newspaper that its online booking form was being revised “to allow us to complete an assessment of all event factors that impact the health and safety of the community.”

After Shepherd tweeted Monday that the university “refused to accommodate” the April 30 event with Goldy – which forced the club to charge $20 per ticket, “as security costs are high” at Waterloo – WLU told The Record the fault lies with the club’s faculty sponsor.

That person “did not make himself available” in time to discuss “safety, security and other related planning matters” as required, the administration said: “When a meeting did take place there was insufficient time left to properly plan for an April 30 event.”

‘They are avoiding putting things in writing’

Shepherd disputed the administration’s claim there wasn’t enough time to book the event on campus, where it would be free.

She told The Fix that the administration now demands “15 working days to develop an event plan in cooperation with the event sponsor.” That demand came courtesy of Paul Jessop, acting vice-president of academic, according to Shepherd.

The club’s faculty sponsor did indeed meet the 15-day requirement, submitting the request for the April 30 event on March 26. “No action has been taken yet to book our April 30th event,” Shepherd told The Fix, apparently because the administration insisted on meeting the faculty sponsor in person.

The sponsor had already told the administration he would be “on vacation” and couldn’t meet in person, Shepherd said: This required in-person meeting “hints to me that they are avoiding putting things in writing.”

In a Monday night tweet, Shepherd mocked the university’s stated inability to approve an event for which it was notified “weeks beforehand”:

Well, University of Waterloo didn’t seem to have a problem working with us and getting this event together in under a week, figuring out security arrangements and everything…

Well, University of Waterloo didn't seem to have a problem working with us and getting this event together in under a week, figuring out security arrangements and everything…

The new “health and safety” mandate, which was emailed to the Laurier Society for Open Inquiry, has ruined the club’s hopes to have a “positive relationship” with the administration, Shepherd told The Fix.

Quoting from the bullet-point list in the email the club received, Shepherd said the event plan submitted to WLU must include “logistics, health and safety review including a determination of security costs, number of attendees both internal and external to Laurier in order to ensure a venue that matches occupancy needs; and media attendance and accreditation.”

The club was not required to meet these mandates for its two previous events on campus, Shepherd said. To the best of her knowledge, these mandates aren’t being applied to any other club.

She acknowledged that the university’s slights against her club may seem like “small things,” but the end result is the Laurier Society for Open Inquiry is treated “unfairly” compared to other clubs.