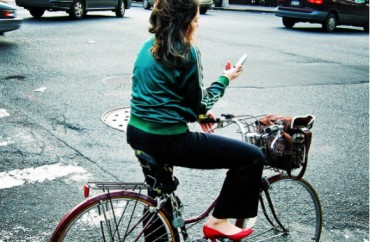 More joke than strategy, Utah school’s idea for brightening up a staircase pays off

A group of students and staff at Utah Valley University has come up with a zany new way to brighten the campus and give campus life a jolt: poking fun at texters.

Last month the school divided the stairs leading to the gym in the Student Life and Wellness Center into three lanes with neon green tape: for walking, running and texting.

A photo of the newly adorned stairs went viral internationally on social media and in news outlets after it was posted a few weeks ago.

The lanes were primarily designed to spruce up a dreary part of campus, Director of Campus Recreation Amy Grubbs told The College Fix in an email.

“Students love the lanes and joke with their friends about it all of the time” even though the rec center is the only part of campus with the lanes, Grubbs said.

The school wanted to “make the stairwell more pleasing to the eye” and to “add a pop of color,” Grubbs said: Students aren’t “expected” to use the lane that matches their behavior. “When you have 18- to 24-year-olds walking on campus, you’re almost bound to run into someone somewhere,” though the design by the Marketing & Communications Department was “meant for people to laugh at rather than a real attempt to direct traffic flow,” Matt Bambrough, Utah Valley’s creative director, said in the school’s press release on the lanes.

Bambrough told The Fix in an email that he “never thought [students] would use the lanes properly,” but it turns out that “more often than not” they do.

He said he witnessed one student walk up the walking lane and another run up the running lane, while a third who was texting “paused, looked up from her phone, and continued walking and texting” up the texting lane.

Sam Hadlock, a recent graduate who served as a student designer on the project, told the Associated Press that the “typographic design” on the steps was popular with student government leaders.

Though it’s not the red-brick-and-ivy look that people associate with universities, “I think it’s fun, and great to see current design on a university campus,” Hadlock said.

When students do notice the lanes, “it’s funny to watch students push their friends over in the right lane as a joke if they’re texting,” Grubbs told the AP. “Other people don’t even see it because they’re so consumed in their phones.”

Student Chelsea Meza told the AP that that the lanes point to the conspicuous role of mobile phones in modern life.

“It’s kind of funny. You walk down the hallway and instead of saying hi, everyone is walking and texting,” Meza said.

The Chinese city of Chongqing installed a “cellphone lane” for texters last year, apparently mimicking an earlier stunt by National Geographic months earlier on a street in Washington, D.C., for a TV show on behavioral science.

The 31,000-student public university would “rather be talking about our dual mission and how we are one of the largest, fastest growing, 4-year universities in the state of Utah, but I guess there are worse things to be known for than a texting and walking staircase.”