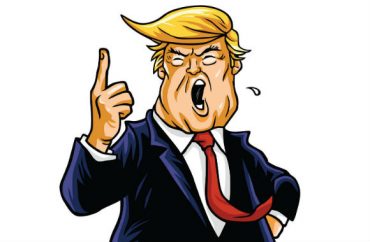 A Catholic university’s course on slavery has apparently been updated to include a new threat to African Americans: Donald Trump.

The upper-level history course at Loyola University Chicago, “Slavery and Abolition Then and Now,” will be taught in the spring semester by Prof. John Donoghue, an expert in the Atlantic slave trade.

The description of the course on the class registration website LOCUS says it “will introduce students to the long durée of global slavery as a means to convey slavery’s ubiquity across time and space.” It also says the course may include “special topics or new approaches of current interest to the instructor.”

Yet this third of the class to be taught in the spring won’t even deal with slavery. The detailed description, which does not have an instructor name on it, reads:

I have revised the last third of the course this spring in light of recent efforts to suppress the black vote, the increasing public exposure of the long-standing problem of racist police brutality, the rise of the Black Lives Matter movement, continuing structural racism -particularly in the prison industrial complex, and the racist rhetoric and conspiracy theories that the Trump campaign has revived in our political culture.

Black Students Matter LUC did not immediately respond to a Facebook message Sunday night asking for the source of its detailed course description.

A similar message appears in a note to members of the Black Cultural Center, posted Friday, that’s attributed to Prof. Donoghue. Donoghue has previously co-edited a book linking slavery to capitalism, Building the Atlantic Empires: Slavery, the State, and the Rise of Global Capitalism, 1500-1945.

The professor is a contributor to the website Historians Against Slavery, “a community of scholar-activists” that promotes modern antislavery movements with “research and historical context.”

In a 2013 article, Donoghue wrote that modern corporations continue to rely on slave labor, citing Halliburton’s hiring of Myanmar workers in 1998: “For enslavers in both the seventeenth and twenty-first centuries, the cost effective profitability of mastering disposable people overshadowed and continues to overshadow the human cost of such greed.”

Donoghue declined to answer questions from The College Fix about the course, and the university did not respond to requests for comment.

Loyola student Randy Dahdouh, a supporter of presidential nominee Trump and member of the College Republicans, said the course description from Black Students Matter LUC offended him as the son of Jordanian and Egyptian parents.

“I am appalled that Loyola would make the connection of Trump and racism,” he told The Fix in a Facebook message. “Mr. Trump has never spoke about African Americans in a disparaging way and to discuss him in a class where it talks about slavery is extremely poisonous to the minds of students.”

Donoghue has previously accused conservatives of racism, once entering into a 2012 feud between the editor in chief of the Loyola Phoenix and a religion professor that concerned the nature of the Tea Party movement.

“While we do not find all sympathizers or active participants in the Tea Party movement to be racists, the racism infusing the movement is unmistakable and taps into a strain of conservatism that for the last half century has relied upon bigotry to further its political agenda,” Donoghue co-wrote in a Phoenix op-ed with a history colleague.

That op-ed claimed there were “well-documented reports that Tea Party adherents directed slurs and spit at black members of Congress voting for” the Affordable Care Act. Yet among the videos taken of that scene, no known video surfaced that supported the claim.