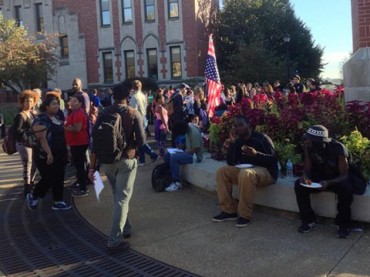 Petition calls for plans to be shelved, wealthy alumni threaten to withhold donations

A proposed sculpture to honor an “occupy” protest against police brutality at Saint Louis University has riled up the school’s alumni, who have launched a petition demanding in part that plans for the monument be shelved. Some alumni have also threatened to withhold donations over the sculpture.

What’s more, students are divided on the issue, and a campus forum is slated for this week to hash out confusion and concern over the proposal.

For six days in mid-October, radical community activists refused to leave the St. Louis campus in a protest intended as an extension of the summertime riots that had wracked nearby Ferguson over the police shooting of Michael Brown. Flying an upside-down American flag, the protesters gave speeches and “teach ins” on topics such as “conscious awakening, systematic oppression, white supremacy, and students’ responsibility to the community.”

The proposed sculpture was one of 13 demands negotiated by the social justice demonstrators – Tribe X, the Metro St. Louis Coalition for Inclusion and Equality, and the Black Student Alliance. University President Fred Pestello agreed to all their demands to get them to leave campus.

The proposed sculpture is slated to fulfill the demand of “mutually agreed upon artwork” and intends to capture “the spirit and importance of the demonstration and encampment at Saint Louis University on October 13-18, 2014,” according to a university statement.

But news of the monument has prompted tremendous backlash from the university’s alumni.

Many donors, like Butch Giessman, felt left out of the university’s decision-making regarding the demands, which are now being called the “Clock Tower Accords.”

“They picked the side with the protesters,” Giessman, founder of St. Louis-based Avmats, told the St. Louis Business Journal. “They don’t care about pissing off the alumni.”

If the university continues to fund the accords, Giessman said he’ll stop pledging money to the university. He’s not alone in those sentiments.

Former NASA employee and 1958 SLU graduate Ken Atkins told the Business Journal that more than 50 alumni from the university’s Parks College of Engineering, Aviation and Technology have discussed their displeasure with the proposed sculpture and accords.

“Almost all of the people said, ‘You’re not getting another dime out of me,’” Atkins said.

Mary Trottier, a graduate of SLU’s medical school, has drafted a petition, collecting signatures from university alumni, benefactors and parents.

Trottier’s petition questions the sit-in’s dialogue, citing videos of a “vile vulgar incoherent speech, defilement of the American flag, and disrespectful interactions with students.” The petition calls for the commission of the sculpture to be deferred, and the accords to be further examined.

“We believe that acquiescing to the demands of nonstudent protestors who were encouraged by a select group of students and faculty to invade and set up residence on campus is an unwise and dangerous precedent,” the petition states. “We also question the appropriateness of signing ANY agreements with ANY protestors at ANY time and for ANY reason.”

Meanwhile, the proposed monument has left students on the urban campus divided.

Some students said they find the statue excessive while others find the monument fits the school’s Jesuit mission.

“Personally I feel like it is a waste of money,” freshman Tim Lally told The College Fix. “The money used on the sculpture could go towards financial aid or other student programs.”

SLU sophomore Jonathan Pulphus, who participated in the sit-in and is a member of both Tribe X and the Black Student Association, said the groups envision the sculpture to be a “symbolic representation of the university’s willingness to dialogue.”

“We are happy that there will be a monument that commemorates the dialogue and discussions that were fostered by the occupation, because we feel that it was a learning experience for all involved,” he told The Fix.

To allow further discussion, SLU’s Student Government Association is hosting a forum this week to allow students to voice “any concerns, praises, comments or questions” related to the accords.

“[S]ome students do not feel like they have had an opportunity to voice their opinions,” SGA president Ann Knezetic wrote in an email to students.

In an email to The College Fix last month, Pestello said the university does not have a decided design or a designated spot yet for the monument. Nor has a cost been estimated.

“Once we have final agreement on the nature and size of the sculpture we will begin to consider a location. The most obvious place is somewhere near the clock tower where the encampment took place,” he said.