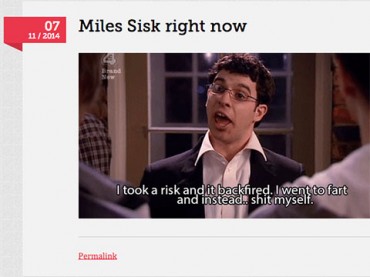 Syracuse University’s fight with its student government over the school’s broad computer-use policy, which theoretically punishes “annoying” or “offensive” speech, appears to have found its exact opposite at the University of Oregon.

Student senate members there are trying to unmask and punish anonymous blogs that are making fun of them – possibly run by one or more of their own members – but have run into hurdles from the university itself, and now wider ridicule from First Amendment groups.

As The College Fix previously reported, Vice President Miles Sisk of the UO student senate said the anonymous blogs were “cyber-bullying” senate members and called their operators “criminals.” He threatened to turn over their IP addresses to the administration for punishment, according to The Daily Emerald.

The blogs in question are believed to be ASUO Conservative Problems and ASUO Progressive Problems, which mostly use animated images to mock campus groups and leaders.

Sisk said last week he was having trouble tracking down the IP addresses, and Assistant Dean of Students Chicora Martin said the blogs would only violate school policy if they are “perceived as threatening either physically or emotionally.”

Martin did not respond to a request for comment from The Fix. Sisk himself appears to be questioning the wisdom of making the “cyber-bullying” claim at a public meeting.

The student official told the Student Press Law Center that he may have gone “too far” in his characterization of the blogs, but that his senate colleagues have “definitely been very hurt” by the blog posts, and he still wants the school to punish the bloggers.

The publicity around the senate’s complaints is “really the exact opposite of what I wanted to do, which was just make them stop,” Sisk told the group. “Now everybody knows about them.”

Azhar Majeed, director of education at the Foundation for Individual Rights in Education (FIRE), told The College Fix in an email he doesn’t think the senate will be successful in shutting down the blogs, which do not appear to contain actual threats.

“The content of these blogs is protected by the First Amendment … unless [the senate] can point to specific content that falls into one of the narrow exceptions to the First Amendment, it does not have a legal basis for shutting down the blogs,” Majeed said. If the school were to unmask the bloggers and punish them, they could have a First Amendment claim in court, Majeed said.

That’s because the Ninth U.S. Circuit Court of Appeals ruled in Obsidian v. Cox earlier this year that bloggers are journalists, meaning the very act of blogging is protected under the First Amendment.

The court – whose jurisdiction includes Oregon – also found that even though a blogger might not write for a professional media outlet, “they’re entitled to all protections the Constitution grants journalists,” as The Atlantic said.

“These outlets must be stringently protected in order to allow students to analyze and criticize decisions made by university officials as well as student government leaders,” Majeed told The Fix.

FIRE said in a separate blog post that Sisk and other critical senators were only following the school’s lead in setting policies that can punish nonthreatening protected speech, such as a UO harassment code that prohibits speech that causes “emotional distress.”

The school threatened to expel a student earlier this year who allegedly caused such “emotional distress” by making a sex joke to a stranger on campus, but backed off after FIRE brought attention to the charges.