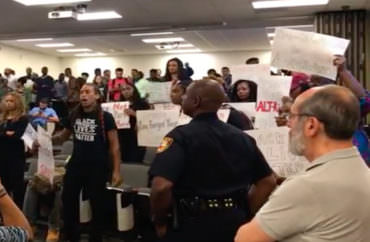 When the president of Texas Southern University, a historically black university in Houston, shut down a Republican lawmaker’s speech amid a Black Lives Matter protest, he claimed the event was not allowed because student organizers had not followed proper procedures in setting it up.

It turns out, that’s not exactly true.

The controversial cancellation of a Republican state representative’s speech at a Texas law school was done even though law school officials had approved of the event, according to documents provided to The College Fix.

The Oct. 9 speech by Texas state Rep. Briscoe Cain was hosted by the Federalist Society chapter at Southern Texas University’s Thurgood Marshall School of Law. It was canceled by the university’s president after Black Lives Matter and other student activists disrupted the event, shouting Cain down and calling him a racist.

University President Austin Lane, in terminating Cain’s speech, claimed that the process had “not been followed in terms of inviting speakers to campus,” a video of his remarks as he shut the speech down shows. Lane called the speaking engagement an “unapproved event.”

A statement released by the university, provided to The Fix by campus spokeswoman Kendrick Callis, asserts that “the Federalist Society was not a sanctioned University organization and proper scheduling procedures were not followed.”

These claims are disputed both by statements and emails by law school officials and by documentation that appears to establish the Federalist Society as a registered student organization.

As well, the interim dean of the law school, James Douglas, argues in statements to the press and in internal memos to administrators that it is not necessary for student organizations at the law school to register with the university, and that the Federalist Society had indeed gone through the law school’s own process for becoming a sanctioned campus group.

“[P]rofessional law schools are more or less self-contained units…the administration of the professional school supervises their student organizations. Their events are held within their school mostly for their students and faculty members and…their students are not managed by the university student service office,” Douglas told administrators in an email obtained by The College Fix.

Douglas went on to dispute administrators’ claims that he had promised in the spring to register law student student organizations with student services.

Underscoring all this, in another email obtained by The College Fix, the assistant dean of student development and academic support at the law school, Virgie Mouton, gave permission for Cain’s appearance at the law school.

“Just want you to know that Briscoe Cain is the State Representative for my hometown, Barrett Station, and all the surrounding communities—Baytown, Highlands, Deer Park, etc,” Mouton wrote to student organizers. “Although I moved away in the early 70’s, my family members still live there. I would love to meet him on Monday. Can you make that happen?”

Neither Douglas’s nor Mouton’s office responded to requests for comment from The Fix.

Meanwhile, the controversy has also turned into a political war of sorts.

Present during the cancellation of the event was Democrat Texas state senator Borris Miles, who accompanied President Lane to the room and in whose district the event took place.

In a statement released on his website, Miles claims the event was cancelled in part because of a “lack of security.”

That claim is unequivocally disputed by Daniel Caldwell, president of the university’s chapter of the Federalist Society, who told The Fix in an email:

Normally, the police department does not attend events even with elected officials present. Some thirty minutes before the event, TSU and Houston PD officers arrived in at least three different vehicles at the front/East of the building and two patrol cars at the back/West. Officers were there with the associate Dean Bynam at the lobby before Representative Cain arrived, while most of the students/protesters were still in class.

When the protest’s student leader became aggressive, the officers removed him. In addition to a half dozen or more uniformed officers, other personnel with security and discipline responsibilities assisted to control entry and exit into the law school auditorium.

“Any security risk that was present,” Caldwell told The Fix, “was no greater than the risk that exists every day.”

It is unclear why Rep. Miles even showed up to the event. While canceling the speech, Lane claimed that he “just happened to be with” Miles when the protests of the event began, and the two rushed over to diffuse the situation.

However, Rep. Cain told The Fix that Miles told him personally that he had “got a call” at his personal business office and rushed over to the university to meet up with Lane and accompany the university president to the event.

Miles is an insurance salesman in addition to the work he does in the Texas senate. According to Google Maps, his insurance office is six minutes from the campus.

Repeated inquiries to Sen. Miles’s office at the Texas senate were not returned. A woman reached at Miles’s insurance office informed The Fix that Miles was out of town.

The Fix attempted to reach President Lane’s office for comment. A campus spokeswoman, Melinda Spaulding, informed The Fix that Lane would not be giving any more interviews to media.

Rep. Cain emphatically maintains that the university was wrong to cancel the event.

“The explanation given by the university is blatantly inconsistent with the administration’s approval of the event for months,” Cain wrote on his Facebook page. “Black Lives Matter was not protesting the paperwork not being filed properly, they wanted to silence speech they disagreed with, and the University allowed it. It’s disgraceful.”