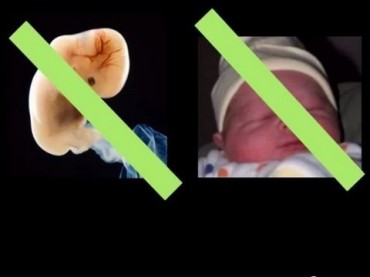 A College Fix article that went viral last fall drew attention to an emerging inclination among young people: pro-life activists who engage college students on campuses across the country are seeing support for so-called “post-birth abortion,” or the killing of infants and young children.

It was a report so shocking, many did not want to believe it.

In response to the article – shared on social media nearly 50,000 times and sparking a national dialogue – Snopes.com attempted to debunk the claim by complaining the piece spun anecdotal evidence into a “study.” Students for Life also published a piece saying they did not think the trend was real.

However, the article explicitly stated its evidence is anecdotal, based on the many experiences of pro-life activists with Created Equal and Survivors of the Abortion Holocaust, whose members show up at college campuses weekly and engage young people in serious conversations about abortion.

Although no official study or poll has been conducted on this issue, Mark Harrington, director of Created Equal, and Kristina Garza, director of campus outreach for Survivors of the Abortion Holocaust, speak with college students about abortion on a regular basis and find that more young people than ever before are willing to admit they support post-birth abortion.

In response to those who questioned the experiences of these pro-life campus advocates, The College Fix returned to the groups’ leaders to get their take on the notion that it was all too outlandish to believe.

In recent interviews, they not only stood behind their assessment, but provided further details to their original claims to help prove it.

The groups use graphic images of aborted babies to spark debate and then hold respectful, one-on-one dialogues with students to change minds on college campuses. Because of this, the exchanges members engage in with students at universities are deeply personal and very real.

Partial transcripts from conversations between Survivors of the Abortion Holocaust team members and college students in recent months reveal the mindset can be found in young people.

On Dec. 3, 2014, at Cal Poly San Luis Obispo, Survivor team member Sam Riley talked with a student who said he supported the “choice of the intellectual human.”

On Oct. 15, 2014, at Golden West College in Huntington Beach, Calif., a student admitted to Survivor team member Josh Cummings that a fetus is a human fetus. When asked when it was okay to kill a defenseless human life, the student said, “many times.” Cummings then asked the student whether a mother could drown her 2-year-old in the bathtub if she couldn’t afford to take care of it. “Yes, absolutely,” the student responded.

On Dec. 10, 2014, at Pomona College in Claremont, Calif., Survivor team member Lizzy Riley talked to a student who called himself a “utilitarian.” He said that if abortion were legal in India then people would not be forced to kill or abandon their baby girls. The situation now, he said, makes it necessary to kill these girls.

On Oct. 13 and 14, 2014, at UC San Diego, Lizzy Riley talked to three or four people who exhibited this utilitarian mindset, saying they had no problem with killing a 1- or 2-month-old. They admitted this after being shown there is no substantial biological difference between a 7-month fetus and a 2-month-old.

“Students wouldn’t be able to articulate where they learned it, but the ideology is so ingrained in them that they don’t even question it,” Lizzy Riley told The College Fix. “Look at where the slippery slope leads. If you’re casually pro-choice, at some point, you’re going to have to defend killing children after birth.”

After The College Fix published its original article, titled “Trending: More college students support post-birth abortion,” InfoWars reporter Joe Biggs got a number of students at the University of Texas in Austin to sign a petition for “post-birth abortion” that would allow killing children up to five years old. His efforts were captured on video.

But long before Biggs posted his man-on-the-street campus poll, Created Equal posted a video showing in a shocking manner the mentality of some modern college students.

“If you kill a baby fetus, it’s the same thing as killing any old inanimate object,” one college student told Created Equal in a 2011 conversation captured on video. “Like a rock, a tree – whatever. It’s not self aware. So what’s the point of holding on to its life?”

When a Created Equal member asked this college student when a young person becomes self aware, he replied: “Um, I am not a scientist, I am not a doctor, but if I recall from taking classes and stuff like that, like after a certain amount of months and years like, after a child is growing, like they begin to understand. I think it’s somewhere around the time of like, speech.”

Trend or not, some students support infanticide

Garza, of Survivors of the Abortion Holocaust, says her team often encounters this viewpoint on campuses.

“We talk with dozens of students a week, and one or two of those students say they think infants and toddlers are not persons,” Garza said.

Harrington, director of Created Equal, told The Fix in October that “we encounter people who think it is morally acceptable to kill babies after birth on a regular basis at almost every campus we visit. While this viewpoint is still seen as shocking by most people, it is becoming increasingly popular.”

In a more recent interview, Harrington responded to naysayers by pointing out that “our anecdotal evidence is more germane to the question of whether … abortion advocates are becoming more intellectually honest—that is to say, accepting of killing born children along with preborn (since there’s no relevant difference) in theory if not in practice.”

“Nobody is claiming that this ideology of accepting infanticide is the norm – far from it,” she said. “Students accepting the humanity of born children, but discrediting his or her value based on cognitive ability, is merely a trend.”

“I don’t think we can completely discredit anecdotal evidence,” she added. “They are one pole of the abortion debate spectrum, of which we see every facet by talking with hundreds of students at high schools, colleges and universities across the country every year.”

“It is difficult to refute that some percentage of late-term abortions fail, and end with the murder of a born-alive infant,” Garza said. “Hence, it would be fair to say that students who support late-term abortion, after admitting the humanity of the preborn child and knowing the failure rate, would also support infanticide.”

In the end, Harrington points out, “We could provide more anecdotes, but no amount of anecdotes will prove conclusively a general trend across all college students.”

For example, in 2013, students from the University of New Mexico were bussed to the Albuquerque polls to vote down the late-term abortion referendum that would have banned abortion after 20 weeks of pregnancy.

And a fall 2013 philosophy syllabus from UC San Diego even includes a piece by Peter Singer, the moral philosopher who supported infanticide. Although most professors are not necessarily teaching that infanticide is acceptable, it is not clear that they are condemning it, either.

One student told Survivors that, a few years ago at one university in Southern California, a graduate school professor who taught “virtue ethics” once gave a lecture in which he used the case of Terri Schiavo to argue along the lines of: “If we could do it in her case (i.e. kill her), why can’t we do it with other people?”

Schiavo was a 26-year-old woman who inexplicably collapsed into a permanent vegetative state and was kept on life support for years before her feeding tube was removed and she died.

The scholar continued to say that he and his partner had a surprise baby, 2 years old at the time. He said, “I absolutely love my son, but I wouldn’t call him a person because he doesn’t have the reasoning capabilities, the personality that I would say is necessary for someone to be called a person.” During that class, none of the graduate students challenged him.

While more college students may support post-birth abortion, the number of students who accept that life beings at conception is also growing, and at a larger and faster rate than those who accept infanticide, Garza said.

“This trend of students saying they think babies are not ‘persons’ for whatever philosophical reason is actually just proof that we’re doing our job,” Garza said. “There is no logical way to disprove the humanity of the child before birth. The next logical step for the … pro-abortion supporter would be to argue that the child may be a human being, but circumstances warrant it ok to kill the child anyway.”

Garza said this trend is not disheartening.

“Pro-life leaders from many organizations have been saying for a few years now that we need to push students out of the mushy middle and force them to choose a side,” she said. “Some are going to choose the ugly extreme for abortion and infanticide. However, most are … going to choose to be 100 percent against abortion, which is the trend that we are also seeing on high school and college campuses all over California.”

According to Gallop, 33 percent of Americans were pro-life in 1996. Today, 46 percent say they are pro-life.