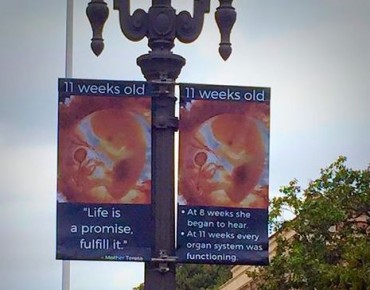 After images of fetuses growing in the womb caused an uproar at the University of Southern California, campus officials plan to tighten policies regulating what banners may be hung on light posts along Trousdale Parkway, a main walkway that cuts through the center of campus.

What’s more, USC Students for Life told The College Fix, campus officials were unwilling to compromise on a way that would have allowed an altered version of their banners to be hung.

In April, banners featuring growing fetuses were hung on Trousdale light posts on behalf of USC Students for Life after the group gained approval – but the banners were swiftly taken down just a few hours after they were hoisted, with administrators saying they were approved “in error.” Now campus officials plan to require all Trousdale lightpost banner reservations be sponsored by an academic department before they can be approved, USC Students for Life told The College Fix in an email. This was not a requirement prior to the April kerfuffle.

“Recently, the co-presidents of USC Students for Life met with a representative of USC Student Affairs to discuss the banner controversy and to try to work things out through a face to face conversation,” the group stated in its email. “During the meeting, we were informed there was no way our banners could be replaced this semester and additionally, the school will be rewriting the Trousdale banner policy over the summer.”

“The new policy will be to require all Trousdale lightpost banner reservations to be sponsored by an academic department before they can be approved.”

When The College Fix reached out to USC to ask about planned revisions, its officials simply replied with a statement issued in April that read in part: “We are working with the student group to find other means of communicating their message, as they do regularly here and at other universities. We respect students’ constitutional right to free speech and only impose reasonable time, place and manner regulations.”

The banners had aimed to promote USC Students for Life’s final project of the semester: a baby shower for a local pregnancy resource center. The student organization went through all the proper administrative channels to ensure their banner project was in accordance with school policy.

But only hours after their banners were hung, USC administrators decided the images did not comply with school policy and would need to be taken down immediately. The following day, the only thing posted on the light posts was a sign that read: “Women deserve the right to choose.” Cynthia Tucker of USC’s Trojan Event Services claimed after the banners were removed that the students had needed to include the date of the event the signs intended to promote, though she had initially told USC Students for Life they only needed to include their organization’s name. That according to a letter sent by the conservative law firm Alliance Defending Freedom to USC asking its officials to replace the banners.

“We are aware that in October 2013 and 2014, USC approved the use of the Trousdale light posts for LGTB pride banners that depicted only rainbow colors and no identification of a student organization or event,” the letter stated. “And earlier this year, the Black Student Assembly placed banners on the light posts that identified only the organization’s name, not a specific event.”

The letter also articulated the source of the students’ confusion regarding their compliance with school policy. ADF explained that the policy governing the use of the Trousdale light posts is written differently in two places. The policy officially states that banners on the light posts must identify an academic program, department or event – whereas the reservation request form requires that the banners promote an academic program or event.

“The past practices of USC … indicate that the name of the organization or event is optional,” Hacker stated. “USC previously approved LGBT rainbow banners without any identification of an academic program or event and Black Student Assembly banners without any identification of any event. Neither of those banners were removed, despite the same alleged violation of USC policy.”

“As a result, USC should have afforded USC Students for Life equal treatment to those other organizations, especially in light of the fact that USC staff could not agree on whether such identifying marks were required.”

USC Students for Life was disappointed that the university was unwilling to let them put banners up before the end of the school year, its members stated in an email.

“During the meeting, we were offered other options, such as tabling along Trousdale or putting up a display for a couple of hours elsewhere on campus,” they stated. “Of course, being an active student organization, we were already aware of those options. But we had decided to reserve the light posts this year for the same reason any other group would reserve the light posts. We wanted to reach a larger audience and draw more people to the event we were advertising. Consequently, we are not content with being told that USC Students for Life should table on Trousdale to get our information posted.”

Though USC Students for Life ended their semester with many challenges, they remain optimistic for the coming academic year.

“It’s definitely frustrating, but we are already planning big things for next semester,” grad student Lisa Ebiner Gavit, USC Students for Life’s former president who was heavily involved with the banner project, told The Fix in an email.

She noted the group will spend the summer working on plans for the upcoming school year, and will study the new banner policy when it comes out and try again to reserve the light posts and put up new banners.

“In addition to that, we have other projects in the works that will hopefully be just as impactful,” she added. “The most important thing to remember is why we are doing this. We want to show people the beauty of the unborn child and we want pregnant women to have the resources and support they need to choose life.”

“The baby shower event which the banners were advertising, while small, was still successful as we were able to collect baby clothes, diapers, and other baby items. We have donated them to Los Angeles Pregnancy Services, where they will be given to mothers in need. We are optimistic that next semester we will be able to create even more opportunities to help young mothers in need and to share the beauty and value of all human life.”