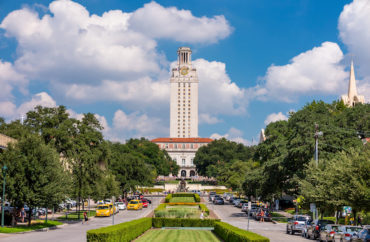 Following sustained criticism and targeted stalking behavior from students and other members of the community, University of Texas at Austin classics professor Thomas Hubbard is defending himself and his scholarship regarding sexual consent laws and pederasty, or sex between men and boys.

Hubbard has been featured, and lambasted, in recent news coverage and editorials for his ongoing efforts to teach and research about pederasty, often depicted in ancient Greek art and literature. Pederastic relationships between men and boys were a prominent social phenomenon in numerous ancient Greek cultures.

Hubbard has written that “contemporary American legislation premised on children’s incapacity to ‘consent’ to sexual relations stems from outmoded gender constructions and ideological preoccupations of the late Victorian and Progressive Era.” He has also argued that “pederastic intimacy” once functioned as a “social mechanism” for dealing with fatherless boys.

In an email interview with The College Fix, Hubbard defended his scholarship and himself against claims that he has nefarious intentions with his research.

“I have never said anything more radical than that we should consider moving in the direction of what most European states do, which is to maintain an age of consent of 14 or 15 with special protections against prostitution of those under 18 or involvement with an adult who is in a position of trust (family members, teachers, therapists, clergy),” he said.

Activist efforts to have him removed from professorship

Hubbard has of late been targeted by activists on the campus. Spearheading those efforts is the student group known as “Fire The Abusers.” Featuring him on their Instagram page, the group says Hubbard is “guilty” of publishing works arguing that “statutory rape and age of consent laws are burdens,” attempting to lower the age of consent, and “being celebrated in online communities for pedophilia views.”

Video recently posted on the Instagram page depicts numerous masked activists pounding on Hubbard’s door and windows at his home, chanting “Thomas Hubbard you can’t hide / pedophile come outside!” Further video shows Hubbard leaving his home under police protection, with the protesters yelling: “Who protects pedophiles? Pigs do, pigs do!”

The blog Incendiary News claims that, in a course titled “Mythologies of Rape,” Hubbard required students to write about their experiences with sexual assault and “made them argue whether or not it is actually rape under Texas penal code.” One student claimed that Hubbard had his students “write a paper over [sic] lowering the age of consent and lowering the punishment for sexually assaulting a child under the age of 6.”

In a public Google doc addressing the controversy surrounding his scholarship, Hubbard denies the claim that he had students write about personal sexual assault experiences. “Students were given a paper topic that asked them to evaluate the legal status of two hypothetical scenarios, and how they would have advised the parties if they had been actual friends. Students were given the option of discussing a real case about which they had knowledge, with names changed to conceal identities,” he said.

Hubbard told The College Fix that his age-of-consent arguments are based in part on other academic scholarship.

“I have…proposed that we might consider a different age of consent for males and females, since the most definitive and never refuted meta-analysis of the psychological effects of teen sexuality with older partners…shows that most college-age males do not regard their teen experiences as harmful, whereas most females regret them,” Hubbard wrote.

The North American Man/Boy Love Association, a pro-pedophilia and pro-pederasty organization, has in the past responded favorably to scholarship with which Hubbard has been associated. In 2000, Wallace Hamilton Press—a publishing company run by NAMBLA—published “Greek Love Reconsidered,” a collection that examines the history of ancient Greek homosexuality and features multiple essays from other classics scholars. Hubbard edited the publication, which featured an essay written by him titled “Pederasty and Democracy: The Marginalization of a Social Practice.”

On his Google doc, Hubbard admits that NAMBLA “distributed part of the print run [of the essay collection] to its members.” He says that he does not “endorse NAMBLA’s idiosyncratic approach to legal reform,” nor does he “share the sexual orientation of its members.” He said the essays in that collection “offered accurate, non-romanticized historical understanding of Greek attitudes” toward adolescent sex

Hubbard has been praised elsewhere in pedophilia circles. A post on the website BoyChat, a pro-pedophile message board, described him as “a great man — fearless on speaking out against today’s phobic persecution of boylove.”

Hubbard argues that UT continues to employ him for his broad knowledge of Greco-Roman sexuality and his extensive scholarship.

“In addition to teaching for 40+ years, I am author or editor of seven books and about 100 scholarly articles, and have received numerous external grants to support my research, including most recently from the prestigious John Simon Guggenheim Memorial Foundation. I am considered one of the world’s foremost experts on ancient Greco-Roman sexuality, and have been invited to author numerous encyclopedia articles on the subject and to lecture at some of the world’s most distinguished universities, including Oxford, Cambridge, London, Paris, Berlin, Munich, Amsterdam, and numerous others on four continents,” he writes on his Google doc.

Hubbard remains defiant about the conclusions he has drawn from his work. “To my accusers, pointing such things out means that I am ‘promoting pedophilia’ and I must be a pedophile myself. For the record, I am not one and have never in my life been intimate with anyone under 18,” he told The Fix.

UT-Austin spokesperson Shilpa Bakre, meanwhile, told The College Fix via email that “the study of controversial and even offensive ideas is protected by academic freedom and the First Amendment — as is the right of others to strongly disagree with and draw attention to those ideas.”

“If someone is alleged to violate university policy or takes actions that threaten the safety of the campus community, the university will respond swiftly, investigating allegations thoroughly and imposing sanctions as warranted,” Bakre said.

Bakre added that “the incidents directed at Professor Hubbard are unacceptable. He received threats of physical harm and had his home vandalized. Students have the right to contest specific ideas, but threatening anyone’s safety violates the law and university standards of conduct. UTPD is concerned by these threats and actions against our faculty members and continues to work to protect them from harm.”

UPDATE: This article has been updated with comment received from a University of Texas at Austin spokesperson.