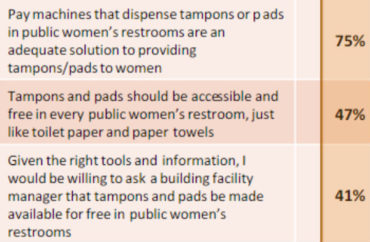 The University of Texas-Austin could become one of the largest schools in the country to provide “free” menstrual products to students.

The sponsors of the student legislative resolution are using research paid for by a menstrual-rights group to promote their cause, but the research may not back up the sponsors’ claims, according to a professor who reviewed it for The College Fix.

Student activists on campuses across the country have been demanding the provision of menstrual products in campus facilities, for emergency purposes or the benefit of poorer students, with mixed results.

American University’s student body president promised “menstrual equity” at the start of the previous academic year, while Syracuse and the University of Wisconsin-Madison made products available in men’s restrooms.

The University of Rochester blew through its tampon budget for the semester in less than two weeks, while Columbia canceled its program due to low interest.

The joint resolution was brought to the floor of the UT Senate of College Councils, the “official voice for students in academic affairs,” nearly two months ago. It was quickly approved, The Daily Texan reported then.

Co-author Jordee Rodriguez cited the difficulty of being a college student, and how often female students may be caught off guard when their cycle starts.

“Currently, 86 percent of women or menstruating people are caught off guard whenever they begin their periods, and that is academically deleterious,” Rodriguez said, according to the Daily, which did not mention a source for Rodriguez’s statistic.

The resolution would make campus “more inclusive and would help all menstruating people to be able to participate fully in their extracurriculars and their academics,” Rodriguez said.

Last month The Fix obtained a copy from the UT administration, which said it wouldn’t comment on the resolution because it was “still in committee.”

It is still not available on the Senate’s legislation webpage. The Student Government, a separate legislative body that must also pass the resolution, does not list it on its own page, which is a year out of date.

The resolution asks the university to launch a yearly drive for “feminine hygiene products,” though the text doesn’t otherwise refer to females, but rather “menstruating individuals.”

Tampons and pads would be stocked in “major buildings” on campus that are “high traffic” areas and funded by unspecified “campus-wide measures.” The resolution asks the Student Government to coordinate with the Gender and Sexuality Center and other organizations to “annually sustain the collection and distribution of menstrual hygiene products.”

The Office of the Dean and University Health Services would also provide “continued funding and distribution” for menstrual products. The resolution estimates menstruating individuals pay $7-10 per month for their own menstrual products.

It provides no suggested funding mechanism, such as higher student activity fees, nor any way to measure the demand for menstrual products so that student dollars aren’t spent in vain.

According to the resolution, providing free tampons and pads can address a number of ills, from high school truancy to life-threatening disease.

It’s not clear whether the products would be available in men’s facilities as well as women’s, but the sponsors made clear their goal was convenience and preventing “embarrassment and bullying because of the stigma” from menstruating.

Asked about the motivation behind the project and evidence that it’s needed, resolution co-author Raphael Jaquette told The Fix that its goal was to “reduce the discomfort of those who begin their period unexpectedly in public while destigmatizing menstruation itself.”

It was inspired by a two-week drive by the University of Texas Orange Jackets known as Project Period, but it was “not initiated on the assumption that menstruating individuals are unable to currently attain hygiene products,” Jaquette said.

‘A majority of women do NOT support’

The 86 percent “caught off guard” statistic cited in the resolution comes from an advocacy group called Free the Tampons.

It commissioned Harris Interactive to conduct an online survey of women 18 and over, asking them if they had ever been “caught” with their menstrual cycle unexpectedly and how they felt about “free” tampons in public bathrooms.

The resolution actually misstated the statistic. The figure is 81 percent of women who have “ever gotten a period” were caught off guard and without menstrual products at some point, and 87 percent for women 18-54.

University of Michigan-Flint economist Mark Perry, a scholar at the American Enterprise Institute, told The Fix the survey methodology was adequate but he was skeptical it would help the cause of the resolution backers.

One survey question asked participants if free menstrual products were on par with toilet paper and paper towels, and “should be accessible and free in every public women’s restroom.” More than half said no, while three in four women said “pay machines” with menstrual products for sale were “adequate” for them.

“It’s hard to figure out why/how a college would use this survey to advocate for something that a majority of women do NOT support,” Perry said in an email.

He also challenged the language of the questions in the survey because they don’t mention the cost increase that would be required to provide complimentary menstrual products, nor who would pay it.

A critic of public college benefits and privileges targeted at women, Perry questioned whether providing such products was compliant with Title IX or whether it actually empowered women.

“And doesn’t it make women look weak and helpless, that they can’t provide their own personal hygiene items by themselves, they have to rely on somebody else, e.g. taxpayers?” he said.

The Office of the Provost, which co-sponsors the Senate of College Councils, did not respond to queries from The Fix. Neither did Caroline Chadwick, chairwoman of the Young Conservatives of Texas.

MORE: Columbia cancels free tampons because no one used them 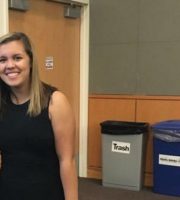