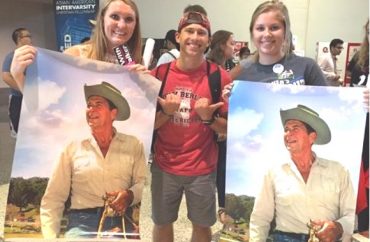 Young Americans for Freedom is a conservative student organization that aims to promote free market economics and Reaganesque principles.

The petition was launched about a month after YAF hosted conservative columnist Ben Shapiro on campus to speak about microaggressions, safe spaces and free speech. The petition decried Shapiro’s visit, claiming it made minority students feel unsafe, and accused Shapiro of denying “systematic and institutional violences” against so-called marginalized communities.

The petition also claimed “members of YAF have further contributed to making campus a hostile environment by attempting to out and misgender LGBTQIA+ students as well as have individually confronted and made unsafe prominent members of student government.”

The Student Coalition for Progress states on its Facebook page that it “delivered” its petition on Dec. 23. A petition update also blamed YAF social media posts for alerting the news media about the university’s new “Problem of Whiteness” class, and encouraged supporters to file a “hate and bias” report if they have been traumatized by YAF members or the national outrage news of the class prompted.

(The College Fix, which broke the story about the “Problem of Whiteness” class, actually learned of its existence from a Multicultural Student Center email, not from YAF social media, as the petition asserts).

“They [Student Coalition for Progress] released the petition and tried to make it a huge deal, but all of their accusations are completely false,” Bell said. “The administration didn’t even seem to know what this petition was talking about. We don’t know who started the petition but the last thing we would ever want to do is target a student.”

Bell noted the petition was released during finals week, a move she believes was deliberate. Her YAF chapter had had its final meeting Dec. 4.

Other conservative campus groups rushed to support YAF after the petition’s dissemination.

UW College Republicans Chair Jake Lubenow called the petition “inflammatory” in a statement and asked the administration to condemn it.

“The petition does not make a single claim substantiated with evidence of any kind,” Lubenow wrote.

The petition gained more than 200 supporters after its Dec. 15 release, however has since been shut down after failing to meet a required number of signatures, according to YAF spokesperson Emily Jashinsky.

“I checked the petition on change.org this week and found it shut down after falling way short of its signature goal,” Jashinsky stated. “People generally appreciate having a group of informed and vocal conservatives on campus to bring ideological diversity to the community and they don’t support the radical Left’s hilariously ill-fated attempts to censor YAF.”

“Wisconsin YAF is an awesome group of energetic student activists who are not in any way threatened by this silly petition,” she added. “In fact, the panic the chapter has induced in campus leftists is an indication of their success. The Left is desperate to shut down YAF’s impactful advocacy for traditional conservative ideas because they know it is really making a difference on campus.”

“I do want to clarify that the petition itself does not represent the university position on the group or constitute a formal complaint against YAF,” Lucas said.

Student Coalition for Progress did not respond to The Fix’s request for comment.

Bell said that YAF will continue to plan events in the New Year, including a speaker debate co-sponsored with UW’s Black Lives Matter chapter.

“The university said that they have no evidence whatsoever of us as a hate group,” Bell said. “We’re not worried at all.”