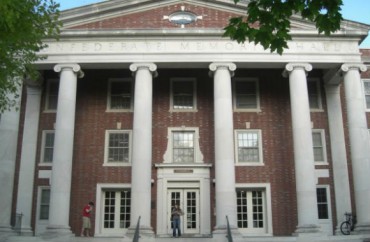 NASHVILLE, Tenn. – Ten years after it lost a court case preventing the school from renaming a controversial residence hall, Vanderbilt University is doing the next best thing: letting the community vent about the name and continuing racism.

What started as a discussion about the history of Confederate Memorial Hall, at a universitywide Sunday night forum, quickly devolved into a discussion about diversity, inclusion and the experience of black undergraduates at the Southern school.

Vanderbilt basically has two options, under the 2005 Tennessee Court of Appeals ruling.

It can pay the United Daughters of the Confederacy nearly a million dollars, in inflation-adjusted dollars, to formally remove the name of the building that the group’s money helped pay for 80 years ago.

Vanderbilt’s lawyers believe the appeals court would also release the school from “the terms of the gift” if the building were demolished, Dean of Students Mark Bandas told The College Fix in an email.

For now, nothing is happening.

Though Vanderbilt’s history with race shows that it has failed to meet the central challenge of our time, “I’m not quite prepared to go to jail to ignore the court order,” Chancellor Nicholas Zeppos told the Sunday night forum.

Bandas, the dean of students, told The Fix the forum and other programming was planned in response to concerns that the inscription on the hall “would become a campus issue” in the wake of the racially motivated church shooting in Charleston and the Black Lives Matter movement.

The Hustler, the student newspaper, ran a story in July about the continuing Confederate name and a separate scholarship set up decades ago for female descendants of Confederate veterans of the Civil War.

And seeing that I go to school on a campus with a dorm named Confederate Memorial Hall #Vanderbilt #HiddenDores https://t.co/SyMCdLgw5w

The residence hall name came up during a “listening tour” that Bandas and staff did last year with the campus Multicultural Leadership Council, Black Cultural Center student leaders and student government among others, he said.

Though Bandas put the Sunday night forum in the context of “a series of dialogues and discussion about the renaming of Memorial Hall,” it’s not clear that the school can legally do anything other than refer to the building as “Memorial Hall” in official materials.

The Hustler reported in July that the shortened name appears on “maps, websites, campus publications and housing assignments,” as well as “all four entrances” to Confederate Memorial Hall.

‘Remove that eyesore from campus’

With the exception of the moderator, the panel Sunday night was all black and included current and former Vanderbilt lawyers, a history professor and a recent graduate.

Associate Counsel James Floyd, who was not listed on the original forum invitation, told the audience that the school first tried to change the name in 2002 but was stymied by the United Daughters of the Confederacy.

The building was part of Vanderbilt’s 1979 acquisition of adjoining Peabody College, which accepted a $50,000 donation from the Confederate group in 1933.

Quoting Vanderbilt’s arguments in court to remove the name, Floyd said the name Confederate Memorial Hall is “at best, offensive, and at worst, a total affront to a free and open society.”

Richard Blackett, the Andrew Jackson professor of American history at Vanderbilt, said he was already unhappy about the name of his professorship.

He would love to “remove that eyesore from campus,” Blackett told the forum: The original Confederate group donation is “predicated on the notion that segregation and the denial of black rights is absolutely acceptable.”

Though Blackett complained that he rarely has more than three or four black students in any class, Vanderbilt’s total minority population was 31.3 percent of its overall student body as of 2014.

“Racism does still exist on this campus,” 2014 graduate Jalisia Singleton told the forum.  She spoke of how she needed to find safe spaces such as the Black Cultural Center when she was a student.

Students should demand that Vanderbilt offer classes that teach the history of racism in America, Vanessa Beasley, the panel moderator and newly appointed dean of the first-year residence hall known as the Ingram Commons, told the forum during Q&A.

Vanderbilt’s liberal-arts requirements for students in the College of Arts and Science already require a Perspective credit to be obtained from classes such as “Blacks and Money” or “Race in the Americas,” however.

The school’s buildings also honor prominent black Americans: Murray House is named for the first African American to serve on Vanderbilt’s Board of Trust, and Smith Hall is named for civil rights advocate Kelly Miller Smith.

One student questioner insisted that the issue was only being discussed because of the Charleston shooting, and that the newfound conversation didn’t demonstrate that Vanderbilt has served people with a “marginalized experience.”

Recent grad Singleton agreed, saying that anyone who leaves the conversation feeling better did not achieve anything.

Like Bandas, Dean Beasley of the Ingram Commons told The Fix the forum was held primarily in response to the Charleston shooting and to explain the legal situation.

She said her biggest takeaway from the forum is that as an administrator, she has an obligation to listen to students’ concerns so they can learn in an environment where they feel safe.

Bandas told The Fix his most important takeaway is the “stories told by students of painful experiences of marginalization on our campus,” to which Vanderbilt should respond by addressing “the more subtle forms of racism which still structure our campus culture.”

CORRECTION: This article has been modified from its original version. Portions of the story about Vice Chancellor for University Affairs David Williams have been removed entirely because he did not attend Vanderbilt as an undergraduate, as originally written. Vanderbilt first tried to change the name of the hall in 2002, not 1989, as originally written. The context of Associate Counsel David Floyd’s quote has been changed to clarify that he was speaking about Vanderbilt’s legal arguments, not his own personal opinion. The shortened name “Memorial Hall” appears on signs at all four entrances to the hall, not the campus as a whole, as originally written.