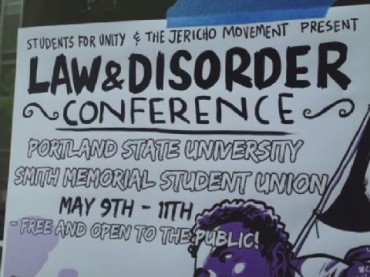 Students at Portland State University stormed a panel talk on police brutality and continuously chanted “we will not be silenced in the face of your violence” among other profanity-laced insults until the event was shut down, a video of the protest shows.

The group of about 15 students was there to impede the appearance of Kristian Williams, an anarchist author who has suggested sexual assault allegations should be more thoroughly investigated rather than assumed to be true.

This stance has angered many feminists, and the students deemed this “hate speech” and accused him of “survivor-shaming” sexual assault victims. The students organized the protest through the Facebook event “Shut Down Kristian Williams!” Campus Reform reported.

The video shows the students standing in various positions around the small room on campus during the May 10 event, working to silence the panelists with their continuous chant.

Anytime a panelist pleaded for civility or open dialogue, the mob would interrupt in unison: “We will not be silenced in the face of your violence.”

During breaks in their chant, one protester yelled: “You will be held accountable for all the people who feel unsafe by the words that you choose and say, and the way you cast doubt on people who have survived traumatic issues.”

“F**k Kristian Williams and f**k you for trying to silence us,” uttered another protestor, who ironically was attempting to silence the panelists.

“It’s not OK, and you shouldn’t be given the space to speak,” said another.

Upon learning that the police were on their way to the event to restore order, the protestors said Williams was using “f**king pigs” to silence them.

The panelists continued to call on a chance to speak, but eventually decided they had no other choice but to cancel the event, the video shows.

Williams and the other panelists left the room because they believed that a police presence would put both them and the protesters in danger, commenting in a joint statement it “was the only way we knew of to ensure the safety of others who were present – including those who were being disruptive.”

The title of the panel was called “Informants: Types, Cases and Warning Signs.”

One of the things Williams has written that has upset feminists, Campus Reform reports, includes his “The Politics of Denunciation,” which states that: “Under this theory, the survivor, and the survivor alone, has the right to make demands … one obvious implication is that all allegations are treated as fact. And often, specific allegations are not even necessary” it reads. “It may be enough to characterize someone’s behavior … as ‘sexist,’ ‘misogynist,’ ‘patriarchal, ‘silencing,’ ‘triggering,’ unsafe,’ or ‘abusive.’”