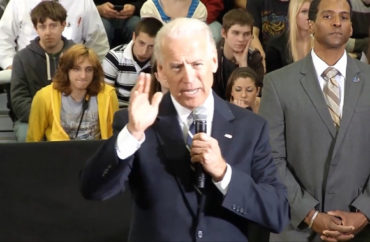 During his presidential campaign in 2020, Joe Biden had some thoughts as to why the cost of college was “skyrocketing.”

On his official website, Biden blamed states for cutting funding to public colleges. He claimed students have been “swindled into paying for credentials that don’t provide value to graduates in the job market.”

But as Vice President in 2012, Biden had a very different explanation for why tuition was rising so quickly: The rapid increase in professor salaries.

Biden, while acknowledging the increasing cost of college was a “puzzle” and there was no “one thing” responsible, also explained that there is “a lot of competition for the finest professors.”

“They all want the Nobel laureates,” he said in response to an audience question.

Additionally, Biden criticized schools for spending money on things “that have nothing to do with student advancement.” He specifically cited boxes for football games, basketball courts, and other things making the campuses more “beautiful” and “commodious.”

“There’s an awful lot of money that goes into the infrastructure of universities that didn’t happen before,” he said.

Biden told the crowd he had discussed a proposal that would have cut federal aid from universities if they didn’t hold their tuition increases below the rate of inflation.

But as student debt and college affordability has gained traction as a major issue during Biden’s campaign and presidency, the point about professor salaries has vanished from his repertoire.

Today, Biden has acquiesced to progressive groups asking him to spend more taxpayer money on higher education, to subsidize the increasing salaries he once decried.

Biden has proposed making public college tuition free to families making under $125,000 a year, a plan that some economists estimate will start at the cost of $50 billion per year. (Others argue the plan will pay for itself, as it will increase the number of college degrees in America, which stimulates tax revenue.)

“I understand the impact of the debt and it can be debilitating,” Biden said in a February 2021 CNN Town Hall in which he committed to “canceling” $10,000 in student loan debt per student via executive action.

Yet on April 1, Biden asked Education Secretary Miguel Cardona to draft a memo explaining whether he did have the authority to cancel $50,000 in loans through executive order.

All of these actions would simply pour more money into a system that Biden criticized nine years ago.

At the time, Biden received blowback from professors for his comments.

“According to national data from the American Association of University Professors, the average salary for continuing faculty members increased by 1.4 percent in 2010-11, just under the rate of inflation. The figure the year before was a 1.2 percent increase, well below inflation,” wrote Inside Higher Ed.

“We have to disagree with Vice President Biden’s analysis,” the Association of Pennsylvania State College and University Faculties said at the time, instead pointing the finger at increased administrative positions on campus.

MORE: Biden: “Some faculty salaries are too high” (!)