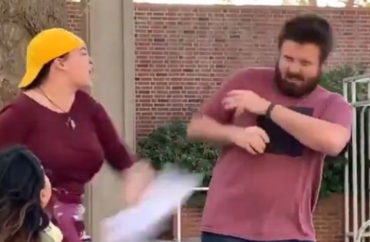 Police say charges may be filed

A video released Wednesday shows a student holding a small “all lives matter” sign getting hit in the face by another student.

The incident took place at Chico State University in California, and according to the campus newspaper The Orion, assault charges may be filed.

The video shows a female student holding a sign that says “black trans lives matter.” The president of the Chico College Republicans, Michael Curry, proceeds to stand next to her with his “all lives matter” sign.

Immediately, the female student grabs Curry’s sign out of his hands. And, launching into a profane rant, hits Curry in the face with his own sign.

Here is the video from the Battery today at @ChicoState. College Republicans across the nation experience treatment just like this on their campuses. It has to stop! @realDonaldTrump @californiafcr @scrowder @benshapiro @FoxNews @BrandonStraka pic.twitter.com/0Iew1sEGda

Throughout the whole video, Curry’s only reaction is to tell someone off camera to call the police after the female student hits him. The rest of the time he stands next to the woman with his hands in his pockets, not saying a word.

The woman, meanwhile, accuses Curry of making her unsafe, saying “he has been fucking harassing me,” after he asks for the police to be called.

She then says that Curry put her name “on the entire fucking internet,” which led to her being harassed.

It is not known what she is referring to. The College Fix reached out to Curry seeking a clarification, but has not yet received a response.

The incident took place in the lead up to a College Republicans event at the university with #WalkAway founder Brandon Straka, who also posted a video on Twitter showing a number of angry students. The #WalkAway campaign encourages those on the left to leave the Democrat Party and its “false narrative” and “victim narrative,” according to its website.

That same student appears in the Curry video, randomly interjecting “fuck Donald Trump” and seemingly dancing, while the female student yells at Curry.

The Orion reported that Curry told them that after screaming in his face, the female student turned around and called the police herself, telling them that he had “troubled” her.

They quote Curry as saying:

She then sat down on a bench and started crying. The police showed up, she lied down on the ground and claimed she was having a panic attack. (She) asked for the police to order an ambulance and they took her away.

The newspaper reported that Chico State police officer Lance Conlan said that “battery charges may be filed with the district attorney.”

In a statement on its website, Chico State condemned “violence, harassment, and demeaning actions of any sort, for any reason, including culturally offensive stereotypes and personal attacks.”

The statement does not mention the incident specifically, but adds that “any reports of taunting, harassing, and of course, any threats and/or physical violence will be dealt with swiftly.”

“It is vital that we connect with and support one another and be vigilant against malicious acts—even those that are not intended to be hurtful,” the statement said.