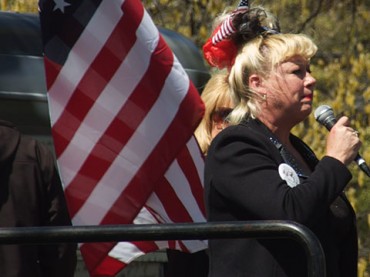 “Why can’t I say that Mohammed had a wife who was six years old?”

As Muslim students at Vanderbilt and their allies gathered to protest an anti-Islam op-ed by a conservative black professor, they probably didn’t expect their party to be crashed by a 1980s-era Saturday Night Live cast member-turned-Tea Partier.

Victoria Jackson, known for portraying celebrities such as Sally Struthers and La Toya Jackson and co-starring with “Weird Al” Yankovic in UHF, tried to take the mic after the protest organizer spoke, but it was summarily turned off, as she recounted in a blog post.

Jackson – who carried a “ban Sharia” sign with her, later tried to convince a Muslim man at the protest to have a debate on “Sharia law and whether we have freedom of speech,” as captured by The College Fix’s exclusive video.

“Why can’t I say that Mohammed had a wife who was six years old?” Jackson said, prompting several protesters to interrupt her and complain that the media were paying attention to her.

The Saturday afternoon protest was organized by Muslim student Farishtay Yamin, who looked on proudly as chants of “Vanderbilt united will never be divided!” and “To reach peace, teach peace!” grew louder.

It was in response to an op-ed written in The Tennessean by Carol Swain, a professor at Vanderbilt Law School.

Responding to the Charlie Hebdo massacre in Paris but not targeting any person or group on campus, Swain asserted that Islam “poses an absolute danger to us and our children” and called for “serious monitoring of Islamic organizations.” The sizeable Muslim population at Vanderbilt and the Muslim Students Association, one of the most prominent interfaith organizations on campus, generated such an uproar about Swain’s op-ed that it drew an administration response.

Dean of Students Mark Bandas emailed the student body to say that that Muslim students had told him they have “felt welcome and safe at Vanderbilt until you read this piece.” He assured them that the school’s “top priority” has not changed: “Ensuring that this campus is welcoming to, and supportive of, all of our students.”

At the same time, Bandas told students to use their freedom of expression to challenge “polarizing speech” and “engage in dialogue with … those with whom you disagree.”

According to Yamin, the student organizer and publicity chair for the Muslim Student Association, Bandas even volunteered to provide a sound system and setup crew for her protest.

But Yamin only met the dean halfway in his call to engage with her critics. Yamin told reporters after her speech that “I felt like I was in a cage” after reading Swain’s op-ed. “I thought if we as students don’t organize a protest against this speech, then there’s no way to ensure that more students won’t be attacked in the future.”

Though more than 800 Facebook users “confirmed” they would attend the protest – helped by a shout-out in the Vanderbilt Hustler – actual attendance was closer to the low hundreds: Yamin admitted to reporters that the “confirmed” number was inflated by her friends back home.

The turnout “shows me Vanderbilt’s commitment to justice and equality,” Yamin said.

Having taught at Vanderbilt since 1999, Swain is famous on campus for her ardent, outspoken conservatism.

She teaches one of the most conservative classes at Vanderbilt, hosts a weekly TV podcast that discusses issues including radical Islam and Al Sharpton’s involvement in Ferguson protests, and appears regularly on Fox News programs. Swain’s website describes her rise from “high school dropout and teenage mother” to “esteemed” law professor.

The overall tone of the protest, though passionate, did not attack Swain personally.

Yamin herself acknowledged after the event that Swain “has substance and that she is an educated woman” and has “a lot of qualifications to be teaching at Vanderbilt.”

But Swain’s speech must be curtailed, Yamin said: “What I’m really trying to show her is that she can’t continue to say these kinds of things on a campus that’s so liberal and diverse and tolerant” or “say bigoted things about her own students.”

How that will happen is unclear, because Yamin said she’s not seeking official sanctions against Swain.

Yamin questioned whether Swain even believes her op-ed. “Her mind can’t be changed,” she said, asked if she would meet with Swain. “I don’t think it’s truly hateful, I don’t know if she even has these views,” but Swain “used a platform of murdering people to gain publicity.”

Yamin’s confusion continued as she said her goal was to show campus officials “that students don’t tolerate hate speech, even though it’s protected under academic freedom, that we don’t allow that on this campus.

“There is no way the students here are going to allow further attacks on their own peers,” Yamin continued. “And if the university respects us as human beings, it has to come out and condemn these statements and promise us that it’s not going to happen again in the future.”

Nonreligious professor: Swain’s words ‘tool for many people who hate’

The protest itself was brief, about 10 minutes of speeches.

Computer science professor Doug Fisher preceded Yamin, saying that his “personal experience with people of Islam is that they are loving, gracious, peaceful, constructive, and honorable people.”

He accused Swain of “oversimplicity” in her characterization of Islam, saying that she herself is not a “simple story” but rather someone with nuanced views on “the negative impact of wealth disparity,” for example.

A nonreligious person, Fisher said: “I find it increasingly hurtful myself. I worry too that my colleague’s words would be a tool for many people who hate. Let’s try not to hate either, as we move forward.”

Yet Fisher told The Fix after his speech that Swain isn’t abusing her position as faculty by speaking against Islam, and that judging whether Swain should be punished is “above my pay grade.”

Many of the students in attendance had signs reading “Better a brat than a bigot” or “Free speech and hate are not synonyms.” Following the protest, many marched to Kirkland Hall, where the chancellor’s office resides, and laid their signs out on the steps leading into the hall.

Former SNL performer Jackson and a man playing a red, white, and blue guitar appeared to be the only counter-protesters at the event. She held a sign reading “Ban Sharia” in the midst of all the other signs.